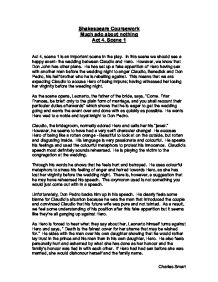 Much ado about nothing Act 4, Scene 1.

Shakespeare Coursework Much ado about nothing Act 4, Scene 1 Act 4, scene 1 is an important scene in the play. In this scene we should see a happy event- the wedding between Claudio and Hero. However, we know that Don John has other plans. He has set up a fake apparition of Hero having sex with another man before the wedding night to anger Claudio, Benedick and Don Pedro, his half brother who he is rebelling against. This means that we are expecting Claudio to accuse Hero of being impure; having witnessed her losing her virginity before the weeding night. As the scene opens, Leonarto, the father of the bride, says, "Come. Friar Frances, be brief: only to the plain form of marriage, and you shall recount their particular duties afterwards" which shows that he is eager to get the wedding going and wants the event over and done with as quickly as possible. ...read more.

There is, however, a suggestion that he may have rehearsed his speech. The oxymoron used is not something you would just come out with in a speech. Unfortunately, Don Pedro backs him up in his speech. He clearly feels some blame for Claudio's situation because he was the man that introduced the couple and convinced Claudio that his future wife was pure and not tainted. As a result, we feel some understanding of his position after this fake apparition but it seems like they're all ganging up against Hero. As Hero is forced to hear what they say about her, Leonarto himself turns against Hero and says, " Death is the fairest cover for her shame that may be wished for." He sides with the men over his own daughter showing that he would rather lay trust in the prince and his men than in his own daughter, Hero. ...read more.

She cannot verbally or physically protect her, so she helps her recover. Her conversation with Benedick is in prose, which shows that there is not much time between what they say in the conversation. Their conversation reveals that they love each other deeply. It also reveals that Benedick searches for the truth but gets swayed by Beatrice to do her dirty work, and challenge Claudio to a duel, for love. At the end of the scene we, as the audience, respond very differently towards the main characters. We think well of Benedick because he searches for the truth instead of jumping to conclusions but feel disappointed in Claudio, Leonato and Don Pedro. They have jumped prematurely to conclusions with no evidence. This scene has proved that they can be very nasty people and Leonato disowns his own daughter when she is perfectly innocent. Charles Smart ...read more.