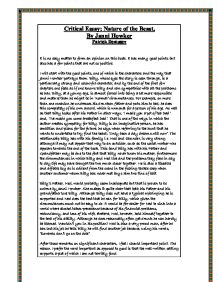 Nature of the Beast By Janni Howker.

Critical Essay: Nature of the Beast, By Janni Howker Patrick Dempsey It is no easy matter to form an opinion on this book. It has many good points but also has a few points that are not so positive. I will start with the good points, one of which is the characters and the way that Janni Howker portrays them. Billy, whose eyes the story is seen through, is a particularly strong and colourful character, and by the end of the first few chapters one feels as if one knows Billy and can sympathise with all the problems he has. Billy, at a young age, is almost forced into being a lot more responsible and mature than he might be in 'normal' circumstances. For example, on more than one occasion he undresses his drunken father and puts him to bed; he does this completely of his own accord, which is unusual for a person of his age. As well as that Billy looks after his Father in other ways; 'I made you a pot of tea Dad' and, 'I've made you some breakfast Dad'. ...read more.

The reason I prefer the word important as opposed to good is that the well-written setting supports a plot of which I am not terribly fond. The setting of the moors above Haverston was obviously a deliberate choice as it is such a depressing place to be or live. The weather in the story is never clement; far from it - it is practically always dismal. A few examples of the nasty weather are - on pages thirty five to thirty seven; 'rain and darkness, again', on page sixty two; 'the snow and the slush' contribute to a mood of misery, depression and general unhappiness, (I could go on for pages listing examples but while that will increase my word count, it most probably will not increase my marks.)... The weather and the mood of the book have much in common as the story goes on, both - practically always dismal. The plot is fairly depressing the various themes, redundancy etc., in the book contribute in an enormous way to this. Some of the themes in the novel reflect the unhappiness and depression felt throughout the book. One of the themes in particular does this rather powerfully; it is redundancy. ...read more.

Possibly due to Billy's unusual family background or maybe just because of where he lives is remarkably connected with nature and how it works. This might where his wanting to become a 'wild man' is derived from. He is not in the slightest bit shy of how nature works, quite the opposite. However Mick is not that way, he is happy to love nature but only from a distance with out seeing the nitty-gritty. A good example of this is how Mick 'goes wild' with Billy's pellet gun but won't willingly go near anything he had shot. The illustration on the cover of the book reflects the story and themes of the book very well. The eyes in the smoke rising from 'Stone Cross' are a very good metaphor for the beast. They show very well that there is really more than one beast in the story. The dark colours echo the mood and setting of the novel. Nature of the Beast' contains a lot more than meets the eye, you have to get into the mind of Billy Coward, and it reveals so much about our lives and of how the beast we need to fight does not roam the moors, but it is inside you and cannot be defeated. ...read more.