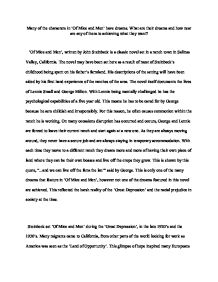 Many of the characters in 'Of Mice and Men' have dreams. What are their dreams and how near are any of them to achieving what they want? 'Of Mice and Men', written by John Steinbeck is a classic novel set in a ranch town in Salinas Valley, California. The novel may have been set here as a result of most of Steinbeck's childhood being spent on his father's farmland. His descriptions of the setting will have been aided by his first hand experience of the ranches of the area. The novel itself documents the lives of Lennie Small and George Milton. With Lennie being mentally challenged he has the psychological capabilities of a five year old. This means he has to be cared for by George because he acts childish and irresponsibly. For this reason, he often causes commotion within the ranch he is working. On many occasions disruption has occurred and occurs, George and Lennie are forced to leave their current ranch and start again at a new one. As they are always moving around, they never have a secure job and are always staying in temporary accommodation. With each time they move to a different ranch they dream more and more of having their own piece of land where they can be their own bosses and live off the crops they grow. ...read more.

Most horrifically, at the climax of the story, he kills Curly's wife in the same way. The fact that he killed her was the final blow to the 'dream'. "I think I knowed from the very first. I think I knowed we'd never do her", George says as he realizes the dream is inevitable. Lennie was inevitably going to be hunted down and shot on site. George, who is forced to join the manhunt for Lennie, decides that the kindest way out for both him and Lennie is to kill him when he finds him. He does this by luring Lennie into a false state of trust by reciting their 'dream' to him one last time. This sends Lennie off into death with his dream in his head. You can argue in some way Lennie has achieved his dream. Curly's wife has a dream common to the period and today. She believes that she has the talent to become a Hollywood actress. She was convinced of this as when she was younger; she acquainted herself with a Hollywood director who deemed her suitable to be an actress in the 'movies'. This is shown in a quote taken from a passage spoken by Curly's wife, "An' I coulda sat in them big hotels, an' had pitchers took of me........An' all them nice clothes they wear. ...read more.

This is one of the reasons the Crooks joins the dream. Candy will soon be too old and frail to keep his job at the ranch. The fact that he only has one hand means that his job opportunities are very limited. He, much like Crooks, has no one in his life. He just watches workers come and go from the ranch. He would have somewhere to belong if he joined the dream. This is a very important psychologically as having a 'place to call home' can give Candy a reason to carry on living. All of these characters have dreams and their dreams are important to them. They all give their character some sort of goal to aim for and a 'light at the end of the tunnel'. I believe Steinbeck is trying to make a point by including all of these dreams. I think he is trying to say that without dreams, we are all lost in our lives. We all need some sort of dream to keep us motivated. I think the novel was written to show the stranglehold that the 'Great Depression' had on America in the 1930's. It also shows how hard the life of an itinerant worker was. 'Of Mice and Men' was very a descriptive and informative book. It made me realise that dreams, however small or big, are vital in life. Simon Cole ...read more.