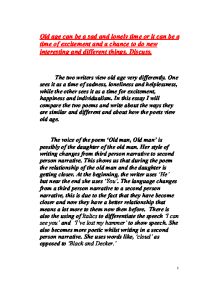 Old age can be a sad and lonely time or it can be a time of excitement and a chance to do new interesting and different things. Discuss.

Old age can be a sad and lonely time or it can be a time of excitement and a chance to do new interesting and different things. Discuss. The two writers view old age very differently. One sees it as a time of sadness, loneliness and helplessness, while the other sees it as a time for excitement, happiness and individualism. In this essay I will compare the two poems and write about the ways they are similar and different and about how the poets view old age. The voice of the poem 'Old man, Old man' is possibly of the daughter of the old man. Her style of writing changes from third person narrative to second person narrative. This shows us that during the poem the relationship of the old man and the daughter is getting closer. At the beginning, the writer uses 'He' but near the end she uses 'You'. The language changes from a third person narrative to a second person narrative, this is due to the fact that they have become closer and now they have a better relationship that means a lot more to them now then before. There is also the using of Italics to differentiate the speech 'I can see you' and 'I've lost my hammer' to show speech. She also becomes more poetic whilst writing in a second person narrative. ...read more.

is now 'so obdurate' in his 'contracted world' and is 'living in almost dark.' The writer also writes about the negative sides of old age such loosing eyesight and memory. She also looks upon old age as time for helplessness loneliness and sadness. This is reflected in her description of the old man and his life. She uses words such as 'ramble,' and 'shamble.' These words show us the negativity of the writer on old age. On the other hand the writer in 'Warning' sees old age as not the end but the start of a new life. She sees it as a time for freedom, a time where you can be a capricious individual. She also sees it as a time for casting off the shackles and responsibilities of adulthood. The writerfeels you can 'wear terrible shirts grow more fat,' and no one will care. She sees all the good sides of old age, a time where she can do all the things she has been shunned from during her childhood as well as adulthood. She wants to 'run my stick along the public railings', 'gobble up samples in shops and press alarm bells' and wear things that don't suit her. Therefore she sees old age as a chance to 'make up for the sobriety' of her youth. ...read more.

There is also a contrast with luxuries and necessity as she writes 'And I shall spend my pension on brandy and summer gloves And satin sandals, and say we have no money for butter' This shows that she only spends money on what is necessary while she wants to spend money on luxuries as well. She uses oxymorons, as luxuries can not really be brought on a pension. She also uses objects, which we associate with old age such as 'summer gloves' and 'satin sandals.' These items are kind of a stereotype of old people. The writer also represents rebellious actions and behavior through objects such as ' I shall wear purple with a red hat' this is rebelling against image and it is shown through the weird and funky clothes she is planning on wearing. I have portrayed that the two poets have different views of old age and this is reflected in their poems. U A Fanthorpe portrays old age as a time for sadness loneliness and helplessness and this is reflected in her poem and the way she describes the old man and his small and lonely world. While Jenny Joseph views old age as a time of excitement, fun, individualism and a chance to do new and exciting things. She sees it as almost a second childhood except this time she doesn't have many restrictions. This is reflected in her poem by the rebellious acts she has planned on doing. ?? ?? ?? ?? 1 1 ...read more.