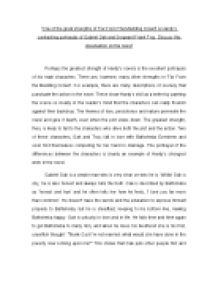 One of the great strengths of Far From The Madding Crowd is Hardys contrasting portrayals of Gabriel Oak and Sergeant Frank Troy. Discuss this observation on the novel

﻿?One of the great strengths of ?Far From The Madding Crowd? is Hardy?s contrasting portrayals of Gabriel Oak and Sergeant Frank Troy. Discuss this observation on the novel? Perhaps the greatest strength of Hardy?s novels is the excellent portrayals of his main characters. There are, however, many other strengths in ?Far From the Madding Crowd?. For example, there are many descriptions of scenery that punctuate the action in the novel. These show Hardy?s skill as a writer by painting the scene so clearly in the reader?s mind that the characters can really flourish against their backdrop. The themes of love, persistence and nature permeate the novel and give it depth, even when the plot slows down. The greatest strength, then, is likely to fall to the characters who drive both the plot and the action. Two of these characters, Oak and Troy, fall in love with Bathsheba Everdene and soon find themselves competing for her hand in marriage. The portrayal of the differences between the characters is clearly an example of Hardy?s strongest work in the novel. Gabriel Oak is a simple man who is very clear on who he is. Whilst Oak is shy, he is also honest and always tells the truth. Oak is described by Bathsheba as ?honest and true? and he often tells her how he feels, ?I love you far more than common?. He doesn?t have the words and the education to express himself properly to Bathsheba, but he is steadfast, keeping to his bottom line, making Bathsheba happy. ...read more.

Sergeant Troy is a very interesting character who is portrayed, the majority of the time, as selfish, conceited and shallow. We first meet Troy when Fanny Robin reminds him of his promise to marry her, which he had apparently forgotten. Troy sends her away, telling her to meet him at All Souls Church. When Fanny misses the wedding, arriving at All Saints Church instead, Troy refuses to marry her, saying: ?you fool for so fooling me!? This shows that he never had any intention to marry Fanny. Fanny ironically describes Troy as ?a man of great respectability and high honour? this is ironic because it is Gabriel who is ?of high honour?, but doesn?t show it, whereas Tory has no honour, but has a fake charm and respectability even though he is a liar. Troy preys on Fanny, getting her pregnant and, eventually, causing her and the child?s deaths. Troy?s relationship with Bathsheba is even more dastardly than with Fanny. His first action in their relationship is trapping her in his spurs at night. Troy lies and says it was an accident, ?We have got hitched together somehow, I think.? But as it turns out, he was planning the meeting, perhaps stalking Bathsheba through the forest. Bathsheba?s first impression of Troy is that he is ?brilliant in brass and scarlet?. Troy is a soldier, strong and handsome on the outside but arrogant and deceitful on the inside. ...read more.

The fates that Hardy leaves the men with at the end of the novel also show their contrasting personalities. Troy is shot in public, causing Boldwood?s imprisonment- his death is open and flamboyant, reflecting on his life and his personality. In contrast, Oak?s ending is a happy, quiet marriage in the rain to the woman he loves; ?At home by the fire, whenever I look up, there you will be. And whenever you look up, there I shall be.? In conclusion, the greatest strength of ?Far From The Madding Crowd? to me is the contrasting portrayals of Oak and Troy. There are, however, many other strengths in the novel, including the themes and the descriptions of scenery. The most important character contrast is between Troy; a selfish philanderer who only thinks of himself and Oak, who is the opposite because he is gentle, kind and honourable. Hardy?s descriptions of Troy and Oak give us a lot of insight into both characters. Hardy?s power with words is never more evident when describing Troy in a nutshell: ?idiosyncrasy and vicissitude had combined to stamp Sergeant Troy as an exceptional being.? Oak and Troy are so different it is easy to understand why the portrayal of Oak and Troy is the novels greatest strength. Hardy sums up the difference between Oak and Troy excellently when he avers: "Troy's deformities lay deep down from a woman's vision, whilst his embellishments were upon the very surface, thus contrasting with homely Oak, whose defects were patent to the blindest, and whose virtues were as metal in a mine." ...read more.