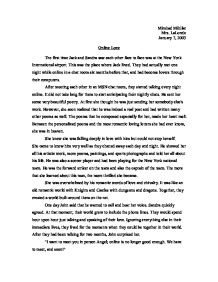 Mirshad Mihilar Mrs. LaLonde January 7, 2003 Online Love The first time Jack and Sandra saw each other face to face was at the New York International airport. This was the place where Jack lived. They had actually met one night while online in a chat room six months before that, and had become lovers through their computers. After meeting each other in an MSN chat room, they started talking every night online. It did not take long for them to start anticipating their nightly chats. He sent her some very beautiful poetry. At first she thought he was just sending her somebody else's work. However, she soon realized that he was indeed a real poet and had written many other poems as well. The poems that he composed especially for her, made her heart melt. Between the personalized poems and the most romantic loving letters she had ever know, she was in heaven. ...read more.

She had heard all kinds of terrible stories about men on the internet, some of them being perverts, murderers, and all kinds of scary things, but she knew in her heart that he was safe and was all that he perceived to be. She had given her heart and trust to him. Now she had to trust him with her very life. Yet it was the next step in their relationship. So she decided to go to him and finally meet this man that made her heart thaw. She called him and said, "Darling, I am coming to be with you." Her week was spent rushing around buying the silky lacy clothes that she wanted to wear for him. Soon the big day was here. Her heart was pounding like crazy for the whole trip. She kept thinking of what he would look like, even though she had seen his pictures online she kept on wondering how he would look in person. ...read more.

"John?" she whispered. "Is it really you?" He smiled and said, "So you really came after all. I thought you wouldn't show up, that you hadn't really meant it, and were just pretending you would come". Nervous and scared, she told him that her luggage was not there yet. He took her hand. "Come outside for a few minutes." He led her to a bench where she guessed people would wait for their bus or taxi. Wrapping her in his arms, he kissed her. The long sweet kiss melted her heart with love and desire for him. At that moment she knew she would go anywhere with him that he asked her to, and that she only wanted him. She felt like she'd died and gone to heaven. At that point she wouldn't have even cared if she did die, as long as it was in his arms. "Surely this can't be real, I must be in heaven and you must be some god or angel" she told him. "No Princess. I am quite real, but I am just a man" he whispered in her ear. ...read more.