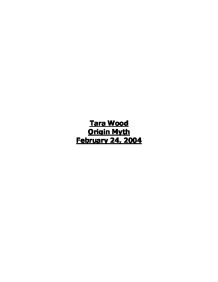 Tara Wood Origin Myth February 24, 2004 Tara Wood Origin Myth February 24, 2004 Before cars, plants, animals or even an earth there was a god named Namibia and he wanted to create something wonderful but he didn't know how exactly to do it. He needed someone or something's help, so he made baby named Lucas who would help the god create his wonderful thing. He told the baby to sleep and to dream of anything his heart desired. Namibia then promised the baby that whatever he would dream about would help to create Namibia's creation and that the baby could then live on his creation. The baby started to sleep and saw this tiny ball of cheese in his dream that started to rapidly grow mold on it. ...read more.

Lucas had tried very hard to make his wish into a dream so his dreams could come true and finally in one of his dreams he dreamt about Emma. He got so excited that his wish had finally become a dream and woke up and to his surprise found Emma on this earth with him. They were both very content with each others company and began to grow older with each other. They both then realized they wanted something new to play with so they both agreed that Lucas should try to dream about something else. They discussed what they think should be their next creation and they decided they were going to make more babies to play with but in Lucas' dream it didn't turn out what he wanted it to be the babies were walking on all fours and had fur and that became the creation of the animals. ...read more.

Lucas' world was perfect for him and Emma so they grew even older and as time went on the animals began to reproduce and then so did Lucas and Emma. They had 6 children and Lucas had now passed on his powers onto his children and told them they each got a piece of their own land to create how they wanted and Lucas and Emma lived on the other piece. Those 7 pieces of the earth became the earth's continents and each of the continents had their own meaning because they were created by different children with different dreams. The earth became more developed as the children grew older and now people's dreams have made even more things such as phones, computers, cars, planes and many other things. To this day the earth is ever changing to how people want it to be. ...read more.