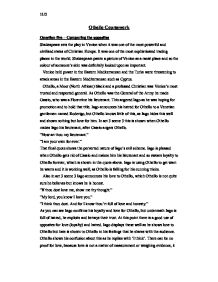 Othello Coursework Question five - Comparing the opposites Shakespeare sets the play in Venice when it was one of the most powerful and civilised states of Christian Europe. It was one of the most sophisticated trading places in the world. Shakespeare paints a picture of Venice as a racist place and so the colour of someone's skin was definitely looked upon as important. Venice held power in the Eastern Mediterranean and the Turks were threatening to attack areas in the Eastern Mediterranean such as Cyprus. Othello, a Moor (North African) black and a professed Christian was Venice's most trusted and respected general. As Othello was the General of the Army he made Cassio, who was a Florentine his lieutenant. This angered Iago as he was hoping for promotion and to hold that title. Iago announces his hatred for Othello to a Venetian gentlemen named Roderigo, but Othello knows little of this, as Iago hides this well and shows nothing but love for him. In act 3 scene 3 this is shown when Othello makes Iago his lieutenant, after Cassio angers Othello. "Now art thou my lieutenant." "I am your own for ever." That final quote shows the perverted nature of Iago's evil scheme. Iago is pleased when Othello gets rid of Cassio and makes him his lieutenant and so swears loyalty to Othello forever, which is shown in the quote above. Iago is using Othello to get want he wants and it is working well, as Othello is falling for his cunning tricks. ...read more.

"I will not stay to offend you." In this quote you can see that Desdemona doesn't have the slightest clue of what she has supposed to have done wrong but leaves, as she doesn't want to upset her Lord. Another example is shown in Act 4 Scene 2 when Othello is questioning Desdemona about her innocence she says, "Your wife, my lord; your true and loyal wife." Desdemona truly does love Othello and tells him how she is loyal and innocent, but Othello believes Iago's twisted words over his own wife's, which I think proves that Othello's jealousy and superstition have taken over, making him weary of his wife's so called unfaithful antics. In act 4 scene 3 Emilia and Desdemona have a conversation about their views on marriage. Desdemona shows her innocence and purity emphasised and the impossibility, of her being unfaithful. She would not be unfaithful for the world. Emilia shows a more down to earth approach to the marriage contrast (but says any unfaithfulness would be to promote her husband opportunities), such as to make her husband King. In this scene Emilia expresses her dissatisfaction with men generally, saying they cheat and lie when it suits them. Desdemona asks Emilia if she would ever be unfaithful Emilia replies, "Nor I neither by this heavenly light. I might do't as well i'th'dark." This means that she wouldn't be unfaithful under the sun but might easily do it in the dark. Emilia believes that women have desires and weaknesses just as much as men and so men should beware that women will learn from how they are abused to abuse them. ...read more.

"In sleep I heard him say, 'Sweet Desdemona, let us be wary, let us hide our loves'. These are all lies but by saying this he makes Desdemona look guilty and false. Iago also tells Othello that he heard Cassio boasting about having had sex with Desdemona, "Or voluntary dotage of some mistress convinced or supplied them, cannot choose but they must blab-." Othello is deeply disturbed by the supposed evidence of confession, which is exactly what Iago wants. As we see Iago's evil side we see that Desdemona is pure and truthful as she tells Emilia that she would not cheat for the world, which shows her honesty, "Wouldst thou do such a deed for all the world." Near the end of the play Othello tells Desdemona to pray for her sins immediately, "If you bethink yourself of any crime unreconciled as yer to heaven and grace, solicit for it straight." Desdemona has know idea what her sins are supposed to be but knows that will be the last night she will be living as Othello says, "I would not kill thy soul." This means send your soul to hell. Desdemona dies for something she did not commit, which was all down to Iago's scheming plans. In conclusion I think it is very clever the way Shakespeare uses opposites to tell the play, the way Desdemona was shown to be 'guilty' and Iago is shown to be 'honest' when in fact it was the other way round. ?? ?? ?? ?? 11/2 ...read more.