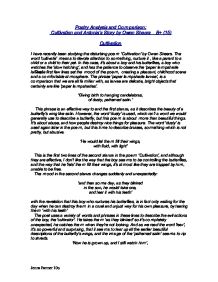 Poetry Analysis and Comparison: Cultivation and Antonia's Story by Owen Sheers B+ (15) Cultivation I have recently been studying the disturbing poem 'Cultivation' by Owen Sheers. The word 'cultivate' means to devote attention to something, nurture it, like a parent to a child or a child to their pet. In this case, it's about a boy and his butterflies, a boy who watches the 'slow hatching', and has the patience to observe the 'paper lampshade larvae'. These first few lines set the mood of the poem, creating a pleasant, childhood scene and a comfortable atmosphere. The phrase 'paper lampshade larvae', is a comparison that we are all familiar with, as larvae are delicate, bright objects that certainly are like 'paper lampshades'. 'Giving birth to hanging candelabras, of dusty, patterned satin.' This phrase is an effective way to end the first stanza, as it describes the beauty of a butterfly's wing like satin. However, the word 'dusty' is used, which isn't a word we would generally use to describe a butterfly, but this poem is about more than beautiful things. It's about abuse, and how people destroy nice things for pleasure. The word 'dusty' is used again later in the poem, but this time to describe bruises, something which is not pretty, but abusive. 'He would let them fill their wings, with fluid, with light' This is the first two lines of the second stanza in the poem 'Cultivation', and although they are effective, I ...read more.

The mood of 'Cultivation' starts off quite uplifting, but in 'Antonia's Story' there is an immediate negative atmosphere with the line: 'She told me how she fell to sleep with the sound of his fists on the door' which creates an image of abuse and an unstable household. This line also tells us that the poet knows this woman, with the words 'she told me', and quite personally, as she has obviously told him personal things about her boyfriend or lover. 'Dull thuds that echoed on the stairs', this line creates a dark atmosphere, with the words 'dull', 'thuds', and 'echoed'. We also get a clearer picture in our heads of the house, and the situation that the poem is set in. 'that became the beat of her heart on the sheet' tells us that she is panicked by the 'dull thuds', so much so that they 'become' her heartbeat. 'On the sheet' means that she's in bed, but the 'beat of her heart' is probably preventing sleep because the noise is so loud. The last line of the second stanza is: 'the rustle of blood in her ear on the pillow, then sleep.' which is very different to 'Cultivation' as by the end of the second stanza we already know what the madman does, whereas here the story is only beginning, and we're not really sure what's going on yet. ...read more.

In 'Cultivation', the boy loves killing butterflies, and in 'Antonia's Story' a man dies trying to get to the woman he loves. However I think that the main similarity between the two poems is the abusive issue that's raised, and used to tell a story over time, about how abuse affects people's lives and how it changes them. When analysing the two poems, I came across more similarities that aren't so obvious, but still important. For example, in both of these poems we never find out the man's name, they are always referred to as 'him' or 'he', creating a mysterious atmosphere. Also, both stories are told from Owen Sheer's viewpoint, for example, in 'Cultivation' he 'watches' the cultivator, but in 'Antonia's Story' he is told all the details personally. There are also of course many differences between the poems, but the one that stands out most is the structures. 'Cultivation' is made up of regular stanzas of five lines, very different to the irregular and unusual patterning found in 'Antonia's Story', making it more unique. Of both the poems I analysed, I would have to say that I preferred 'Cultivation', as I found it had more varied descriptions than 'Antonia's Story' which was mostly repeats of the lines. I also found the structure of 'Cultivation' made it easier to follow. However I enjoyed both of the poems in different ways. 'Cultivation' because of the imaginative descriptions, and 'Antonia's Story' because of it's originality. Even though there were some similarities, they were very different poems. Jenna Farmer 10o ...read more.