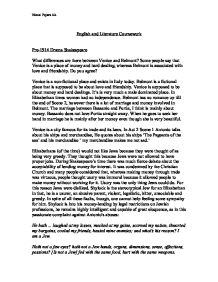 Pre-1914 Drama Shakespeare - What differences are there between Venice and Belmont? Some people say that Venice is a place of money and hard dealing, whereas Belmont is associated with love and friendship. Do you agree?

English and Literature Coursework Pre-1914 Drama Shakespeare What differences are there between Venice and Belmont? Some people say that Venice is a place of money and hard dealing, whereas Belmont is associated with love and friendship. Do you agree? Venice is a non-fictional place and exists in Italy today. Belmont is a fictional place that is supposed to be about love and friendship. Venice is supposed to be about money and hard dealings. It's is very much a male dominated place. In Elizabethan times women had no independence. Belmont has no romance up till the end of Scene 2, however there is a lot of marriage and money involved in Belmont. The marriage between Bassanio and Portia, I think is mainly about money. Bassanio does not love Portia straight away. When he goes to seek her hand in marriage he is mainly after her money even though she is very beautiful. Venice is a city famous for its trade and its laws. In Act 2 Scene 1 Antonio talks about his ships and merchandise, He quotes about his ships 'The Pageants of the sea' and his merchandise ' my merchandise makes me not sad.' Elizabethans (of the time) would not like Jews because they were thought of as being very greedy. They thought this because Jews were not allowed to have proper jobs. During Shakespeare's time there was much fierce debate about the acceptability of lending money for interest. ...read more.

In the casket test Portia's dead wise dead father controls whom she marries even though he is dead so that the wrong person does not marry his daughter. He makes sure that she does not marry someone who is only interested in money and full of themselves. The casket test reflects her father's wisdom in a society where marriage is about marriage and business. Portia is not free to select her own husband. Portia however does not incapable of choosing the right husband for herself as she is a very intelligent woman. Most of the characters speak in blank verse especially for formal speech between important characters and when something important is being said. When we first meet Portia she seems to be inclined to obey her Father's wishes even though he is dead. She would like to choose a husband but is prevented from doing so because the suitor who wishes to marry her has to pick the correct casket. (Act 2, Scene 7) Portia says, "Go, draw aside the curtains and discover The several caskets to this noble prince. ..." In this play Shakespeare makes Portia look a clever, intelligent, scheming women. An Elizabethan audience would not have expected a woman to outwit men. At the beginning of the play, Portia does what her father tells her to do. ...read more.

none of us Should see salvation; we do pray for mercy, And that same prayer doth teach us all to render The deeds of mercy. I have spoke thus much To mitigate the justice of thy plea, Which, if thou follow, this strict court of Venice Must needs give sentence 'gainst the merchant there." Shakespeare challenges many ideas that were in practice in Elizabethan era. For example the convention, of the time, in which wealthy people had arranged marriages. He portrays Portia initially as a woman who wanted to find a husband and who obeyed her father's wishes. In Act 1, Scene 2, lines 23-26 Portia says, "I may neither choose who I would, nor refuse who I dislike, so is the will of a living daughter curbed by the will of a dead father." Portia is clearly the most intelligent person in the play; this is typical of Shakespeare but unusual in those days. Shakespeare intends to the show a difference between the law and actual justice. If the law had been carried out Antonio would have died because of losing his pound of flesh. Portia, however, uses the exact letter of the law to prevent his death. In conclusion, I do not agree. Belmont is about marriage, not love. It is more about money. Venice is not all about hard dealings and money. It is also about love and the friendship between Bassanio and Antonio. Nimai Pujara 4A ...read more.