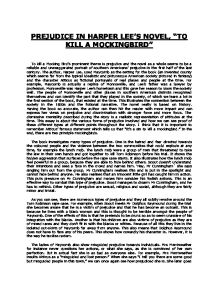 PREJUDICE IN HARPER LEE'S NOVEL, "TO KILL A MOCKINGBIRD" To kill a Mocking Bird's prominent theme is prejudice and the novel as a whole seems to be a reliable and unexaggerated portrait of southern Americans' prejudice in the first half of the last century. The author, Harper Lee, used Maycomb as the setting for the book (an invented county which seems far from the typical idealistic and picturesque American society pictured in fantasy) and the character Atticus as fictional portrayals of real places and people at the time. For example, Maycomb is actually a replica of Monroeville, and Lee's father was a lawyer by profession. Monroeville was Harper Lee's hometown and this gave her reason to know the society well. The people of Monroeville and other places in southern American districts recognised themselves and can identify the part that they played in the society, of which we learn a lot in the first section of the book, that existed at the time. This illustrates the connection between the society in the 1930s and the fictional narrative. The novel really is based on history. Having the book so accurate, the author can then hit the reader with more impact and can express her views on prejudice and discrimination with stronger force and more focus. ...read more.

When Scout and Jem go to visit, it is frowned upon by Aunt Alexandra. The segregation is shown here when Scout and Jem arrive at the church as the crowds part to let them through first. The blacks are also segregated in the courtroom as they sit in the balcony further away from the court scene. It shows the reader how the prejudice is blatant in society. This is how it would have been in southern America in the 1930�s. When Scout asks if she may visit Calpurnia, her Aunt rules rejects bluntly, without an explanation but by saying 'You may not�. This implies that Aunt Alexandra is prejudice towards Calpurnia and her shortness and the tone that she projects to the reader also suggests this. Aunty Alexandra says "She is trash!" referring to Calpurnia. However, the blacks and whites do not know any better. For centuries, blacks had been used and exploited, and it is second nature for the whites to discriminate against them. There is also sexual prejudice in 'To Kill a Mocking Bird�, for example Scout has to wear a dress to school and has to accompany the ladies of Maycomb for their weekly gathering. ...read more.

Atticus throughout the book teaches it to his children and says 'You never really know a man until you stand in his shoes and walk around in them� this is what Atticus tells his children, it is a good moral to live by. The reader has to stop and rethink back to the beginning of the book when Jem�s arm broke to understand the connections of how the enclosed community of Maycomb could be so narrow minded and how someone could attack another adult's children. The reader also reconsiders why Boo Radley never wanted to come out, giving you a different perspective to wards the book and the inhabitants of Maycomb. The novel depicts many aspects of prejudice and racism, and we can see how often the most honest and admirable people are mockingbirds. The problame is how often they get shot, when all they do is good. By writing the book, the author raises awareness of the prejudice that was in Southern America. We learn that prejudice is aimed at minorities and often people who are only slightly different. Women, coloured people and people who attempt to protect black people are all treated with minimal respect and are affected by prejudice every day. After all this, the locals dare say that "It's a sin to kill a mockingbird"... ...read more.