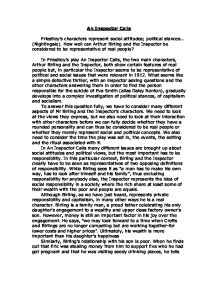 Priestley's characters represent social attitudes; political stances... (Nightingale). How well can Arthur Birling and the Inspector be considered to be representative of real people?

An Inspector Calls Priestley's characters represent social attitudes; political stances... (Nightingale). How well can Arthur Birling and the Inspector be considered to be representative of real people? In Priestley's play An Inspector Calls, the two main characters, Arthur Birling and the Inspector, both show certain features of real people but, in particular the Inspector seems to be representative of political and social issues that were relevant in 1912. What seems like a simple detective thriller, with an inspector asking questions and the other characters answering them in order to find the person responsible for the suicide of Eva Smith (alias Daisy Renton), gradually develops into a complex investigation of political stances, of capitalism and socialism. To answer this question fully, we have to consider many different aspects of Mr Birling and the Inspector's characters. We need to look at the views they express, but we also need to look at their interaction with other characters before we can fully decide whether they have a rounded personality and can thus be considered to be real people or whether they merely represent social and political concepts. We also need to consider the time the play was set in, the events, the setting and the ritual associated with it. In An Inspector Calls many different issues are brought up about social attitudes and political views, but the most important has to be responsibility. ...read more.

Mr Birling then reacts and seems very annoyed as he says, "Look, Inspector I'd give thousands, yes, thousands!", but the Inspector then says, "you're offering the money at the wrong time. Mr Birling", this shows us that Mr Birling isn't used to being confronted by someone else, which is exactly how someone of Mr Birlings stature would react, so again Mr Birling is reacting as he should and is therefore well representative of real people. Another aspect that Priestley has considered is if a person is to represent real people then not only does he have to act and talk like them but he has to go to ordinary events, like golf for example, this would be well suited to Mr Birlings character as most "higher class" men used to play golf to relax in the era of the play, Mr Birling mentions that he and Gerald should play golf sometime nearer the beginning of the play, this shows that a lot of thought has gone into Priestley's characters and research, as even a word can change the perspective of a character and Priestley puts this to great use. Mr Birlings views on society are that if you are wealthier than somebody else, then you are better than that person, for example if you were a working class human being, anyone in a higher class than you (like Mr Birling) ...read more.

The Inspector though is in total contrast to Mr Birling and is very mysterious and even ghostly at times, he hasn't really got much of a background, but strongly represents social attitudes, he is also extremely menacing to a point that he makes the other characters in the play frightened of him, he is very to the point and deals with one line of enquiry at a time to avoid confusion, he is also very prepared and organized as of what to say and do as he hasn't got much time to get the Birlings to admit to their involvement in causing Eva Smith to commit suicide. The Inspector never forgives nor punishes but just tries to warn the Birlings of their doings so that they can say the right things to the real Inspector, and to know what they have all done. I believe that Priestley has meant to not go into detail on the Inspectors feelings and beliefs, as this almost adds a sought of mystery around the Inspectors character, it mainly gets you thinking towards the end, is the Inspector real or are the Birlings just hallucinating, or could the Inspector be a ghost or a Goole which his last name could represent (Inspector Goole). But the question was can the Inspector represent a real person, to a certain extent yes, but not as fully as Mr Birlings character can, so in my opinion he is not a very good representative of real people in the era of the play. ...read more.