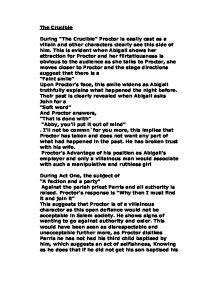 The Crucible During "The Crucible" Proctor is easily cast as a villain and other characters clearly see this side of him. This is evident when Abigail shows her attraction for Proctor and her flirtatiousness is obvious to the audience as she talks to Proctor, she moves closer to Proctor and the stage directions suggest that there is a "Faint smile" Upon Proctor's face, this smile widens as Abigail truthfully explains what happened the night before. Their past is clearly revealed when Abigail asks John for a "Soft word" And Proctor answers, "That is done with" "Abby, you'll put it out of mind" . I'll not be commn`for you more, this implies that Proctor has taken and does not want any part of what had happened in the past. He has broken trust with his wife. Proctor's Advantage of his position as Abigail's employer and only a villainous man would associate with such a manipulative and ruthless girl During Act One, the subject of "A faction and a party" Against the parish priest Parris and all authority is raised. Proctor's response is "Why then I must find it and join it" This suggests that Proctor is of a villainous character as this open defiance would not be acceptable in Salem society. He shows signs of wanting to go against authority and order. This would have been seen as disrespectable and unacceptable further more, as Proctor dislikes Parris he has not had his third child baptised by him, which suggests ...read more.

Proctor chooses the easy way to escape troubles, as it is a chance to avoid facing up to his responsibilities. He put his own reputation above the well being and happiness of his family. As he cries out "Because it is my name because I cannot have another in my life" Which finally shows that proctor is apprehensive towards his reputation in the community more than anything else. It is now visible that proctor is showing definite signs of being a villain and not of a hero. It is clear that john has committed the crime of lechery however when approached by Abigail again, john rejects her advances despite her insistence he is determined to remain loyal and faithful to his wife, despite Abigail's reminders of the past. "Give me a word john. A word" "No, no Abby. That's done with. "Abby, You'll put it out of mind. I'll not be coming' for you more" Which indicates that proctor clearly regrets his past with Abigail and wants Abigail to put it out of mind. As john regrets his affair with Abigail he tries to make amends to gain Elizabeth's trust. The attempts to please Elizabeth are clear, as is shown when the compliment about the cooking and his promise to buy George Jacob's cow Proctor replies to the taste of the rabbit "It is well seasoned" "If the crop is good I'll buy George Jacob's heifer. ...read more.

"I have three children-how may I teach them to walk like men in the world" This quotation is saying that if he gives his confession he will be shamed as well as his sons, this courageous and heroic decision reveals that proctor is a caring family man that cares for his friends and puts other people first a type of man that cannot be classified as a villain in any respect. Conclusion It is difficult to establish whether Proctor is a hero or Villain. The evidence is contradictory; on the one hand Proctor can be seen as a villain for his wrong doings in the past which involved an affair with a teenage girl named Abigail Williams, This selfish and thought less action precipitates much of the chaos in Salem. Perhaps ultimately he is simply human and has made the mistakes of many. But on the other hand proctor can be seen as a hero to his wife and to his friends, this is shown near to the conclusion of the story when he confesses to the crime of lechery to save his wife and his friends when trying to prove that the girls are lying and it was pretence. In the opinion of the viewers of the book would like for proctor to be a courageous hero, but he only starts to show signs of this during the end of the book but if viewing it as a puritan in the Salem society proctor would seem to be a villain as the amount of evidence shown in the text ...read more.