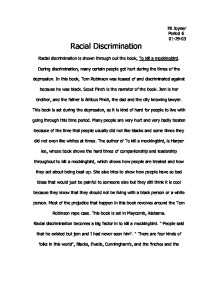 Eli Joyner Period 6 01-29-03 Racial Discrimination Racial discrimination is shown through out the book, To kill a mockingbird. During discrimination, many certain people got hurt during the times of the depression. In this book, Tom Robinson was teased of and discriminated against because he was black. Scout Finch is the narrator of the book. Jem is her brother, and the father is Atticus Finch, the dad and the city knowing lawyer. This book is set during the depression, so it is kind of hard for people to live with going through this time period. Many people are very hurt and very badly beaten because of the time that people usually did not like blacks and some times they did not even like whites at times. The author of To kill a mockingbird, is Harper lee, whose book shows the hard times of companionship and leadership throughout to kill a mockingbird, which shows how people are treated and how they act about being beat up. ...read more.

In this time period, racism was something that happened every day but know people in the new world know that they are not allowed or they should not discriminate other people by what they wear or what color of skin they have. "Jem used to think that there were only one type of folks". Mayella ewell is disrespected and picked on because she did not live with a very nice family, who mainly is Bob Ewell, the drunk of the book. Scout points out that "Mayella Ewell must be the loneliest person in the world, even more lonely than Boo Radley". This is kind of mean because people sometimes say that Boo Radley is mean to blacks and that is trying to tell that Mayella Ewell may turn into someone like that. Harper lee shows that racial discrimination and discrimination can be the same thing except racial discrimination is different than discrimination by it discriminates people races rather than something that they wear and something's that they like to buy or purchase. ...read more.

I believe that atticus finch has to take a very hard job because most of the people in maycomb county and the county's all believe that blacks are bad and they should be punished for their race. This is true because people in the city believe that blacks are bad for the community and they should have to be put in jail if they are accused and they might not be guilty, but they are still thrown in jail because of the outside appearance color of their skin. Telling people in maycomb sometimes shows racial jokes while blacks are selfish people, and they should just be put in jail for being selfish. I would hate to always be picked on because what color of my skin I was, or if people to make racial comments that maybe I am small, or like they don't like my racial background. I still believe that people all over the world should just come together and share what they know about racial discrimination. ...read more.