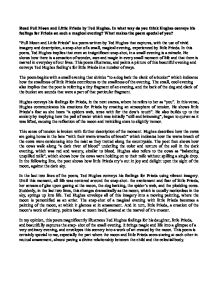 Read Full Moon and Little Frieda by Ted Hughes. In what way do you think Hughes conveys his feelings for Frieda on such a magical evening? What makes the poem special of you?

Read Full Moon and Little Frieda by Ted Hughes. In what way do you think Hughes conveys his feelings for Frieda on such a magical evening? What makes the poem special of you? "Full Moon and Little Frieda" is a poem written by Ted Hughes that captures, with the use of vivid imagery and description, a snap-shot of a small, magical evening, experienced by little Frieda. In this poem, Ted Hughes implies that even an insignificant snap-shot, in a small evening is a miracle. He shows how there is a sensation of wonder, awe and magic in every small moment of life and that there is marvel in everyday of our lives. ...read more.

He also builds up to the anxiety by implying how the pail of water which was initially "still and brimming", began to quiver as it was lifted, causing the reflection of the moon and twinkling stars to slightly tremor. This sense of tension is broken with further description of the moment. Hughes describes how the cows are going home in the lane "with their warm wreaths of breath" which indicates how the warm breath of the cows were condensing into the mist as they trotted along the countryside. The poet then shows how the cows walk along "a dark river of blood" underling the color and texture of the soil in the dark evening, which was red and watery, similar to blood. ...read more.

The snap-shot of a magical evening with little Frieda becomes a painting of the moon, at which it glances at in amazement. And in turn, little Frieda, a creation of the moon's work of artistry, points back at moon itself, amazed at the marvel of it's creator. In my opinion, this poem magnificently illustrates Ted Hughes feelings for his daughter, little Frieda, and beautifully captures the snap- shot of the small evening. It brings magic and life into a glimpse of a very ordinary evening, and envelopes this scenery into a work of art created by the moon. This poem is certainly special to me, especially the part where the moon and little Frieda seem staring at each other in mutual amazement, almost paving a divine relationship between the child and the celestial body. ...read more.