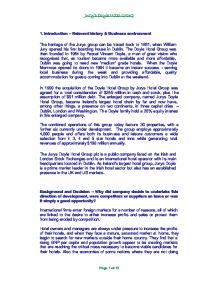 1. Introduction - Relevant history & Business environment The heritage of the Jurys group can be traced back to 1881, when William Jury opened his first boarding house in Dublin. The Doyle Hotel Group was then founded in 1964 by Pascal Vincent Doyle, a man of great vision who recognised that, as tourism became more available and more affordable, Dublin was going to need new 'medium' grade hotels. When the Doyle Montrose opened its doors in 1964 it became an instant success - serving local business during the week and providing affordable, quality accommodation for guests coming into Dublin at the weekend. In 1999 the acquisition of the Doyle Hotel Group by Jurys Hotel Group was agreed for a total consideration of $255 million in cash and stock, plus the assumption of $81 million debt. The enlarged company, named Jurys Doyle Hotel Group, became Ireland's largest hotel chain by far and now have, among other things, a presence on two continents, in three capital cities -- Dublin, London and Washington. The Doyle family hold a 25% equity interest in this enlarged company. The combined operations of this group today feature 30 properties, with a further six currently under development. The group employs approximately 4,000 people and offers both its business and leisure customers a wide selection from it 3, 4 and 5 star hotels and inns while generating total revenues of approximately $190 million annually. The Jurys Doyle Hotel Group plc is a public company listed on the Irish and London Stock Exchanges and is an international hotel operator with its main headquarters located in Dublin. As Ireland's largest hotel group, Jurys Doyle is a prime market leader in the Irish hotel sector but also has an established presence in the UK and US markets. Bottom of Form Background and Decision - Why did company decide to undertake this direction of development, were competitors or suppliers an issue or was it simply a good opportunity? ...read more.

Shares in the Jurys Doyle Hotel Group have slumped by over 10 per cent, despite recording a pre-tax profit of �45.8m last year. The company said it was 'cautiously optimistic' for the year ahead. Group turnover totaled �253.8m in 2003, slightly below market expectations. However, the 13 per cent fall in profits in comparison with the previous year's figures was skewed by the company's switch to a calendar fiscal year during 2002. The overall occupancy level across operations in its three markets was down by almost one per cent in 2003. However, the hotel group said that research showed it had managed to out-perform its competitors in the Dublin, London and Washington markets. For the first time in its history 55% of profits are coming from outside Ireland, which means reduced dependence now on the Irish market or the Irish economy, as only 45% of profits in the last year came out of Ireland. And that will obviously be a diminishing trend with the opening of properties in London and Croydon coming on stream, and with the aggressive policy of growing. Jurys purchased their first hotel in London, in Kensington in 1993, and continued their expansion up until last year when they purchased the Doyle Group (London:JDH.L), which was 11 hotels, seven in Ireland, three in Washington, DC and one in London. Hotels and 10 Inns between Ireland, UK and US. For the year gone out to 30 April, turnover was up 106% to �219 million, profit before tax was up 70% to �50 million. Earnings per share were up 36% to 73.8 cents, and dividend then was up 23% to 17 cent. Put it this way, over the last 10 years the company has grown 10 times, now obviously that level of growth will not be sustained in that sense because as a company get bigger it's harder to achieve that. But there is no doubt that they have to grow much larger, to grow the brand, particularly the Inns brand in the UK and four star brands. ...read more.

According to Mr McCann, the group has around �120 million available to spend on acquisitions. "The business is very cash generative and over the past ten years, we have completed two to three acquisitions a year." Some interesting information on the balance of power between Jurys and the family run Doyle Group has emerged. Last year, 56% of group revenue was earned in hotels and inns already owned by Jurys plc as against 44% attributable to Doyle properties. Margins in Jury properties stood at 34% as against 30.6% in former Doyle properties where occupancy rates were somewhat lower, which may be due to the fact that the Doyle Group was known to be for sale for some time. This may have had an impact on staff morale and on forward bookings. Margins in the Doyle hotels should be raised to the current levels at the Jury properties within 18 months, it is predicted. In terms of geographical breakdown, 60% of revenues were earned in the Republic, 30% in the sterling area and 10% in the US. The sterling area accounted for 43% of group profits. One of the main attractions of the Jury Doyle hotels is their prime locations across Ireland, the US and the UK. For example, the 5 star Doyle Westbury was developed in 1980 and is still one of Dublin's leading hotels and located just off Grafton Street, adjacent to St. Stephen's Green, there isn't a better hotel location in town. In London, the 4-star Clifton Ford Hotel is also in a prime location in the West End near the junction of Bond Street and Oxford Street. In Washington, D.C. the company operates three hotels. The newly-opened Doyle Washington Hotel is close to the 3-star Washington Courtyard which is located on Connecticut Avenue. The 3-star Doyle Normandy Inn is also located nearby. All three hotels are located on Connecticut Avenue, close to just about everything in America's capital city. ...read more.