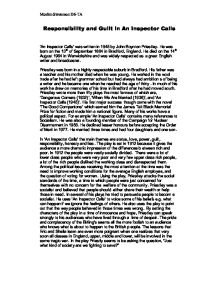 Responsibility and Guilt in An Inspector Calls

Responsibility and Guilt in An Inspector Calls 'An Inspector Calls' was written in 1945 by John Boynton Priestley. He was born on the 13th of September 1884 in Bradford, England. He died on the 14th August 1984 in Warwickshire and was widely respected as a great English writer and broadcaster. Priestley was born in a highly respectable suburb in Bradford. His father was a teacher and his mother died when he was young. He worked in the wool trade after he had left grammar school but had always had ambitions of being a writer and he became one when he reached the age of thirty. In much of his work he drew on memories of his time in Bradford after he had moved south. Priestley wrote more than fifty plays the most famous of which are, 'Dangerous Corners (1932)', 'When We Are Married (1938)', and 'An Inspector Calls (1945)'. His first major success though came with the novel 'The Good Companions' which earned him the James Tait Black Memorial Prize for fiction and made him a national figure. Many of his works have a political aspect. For example 'An Inspector Calls' contains many references to Socialism. He was also a founding member of the Campaign for Nuclear Disarmament in 1958. He declined lesser honours before accepting the Order of Merit in 1977. He married three times and had four daughters and one son. In 'An Inspector Calls' the main themes are status, love, power, guilt, responsibility, honesty and lies. The play is set in 1912 because it gives the audience a more dramatic impression of the differences between rich and poor. In 1912 the people were vastly socially divided. There were a lot of lower class people who were very poor and very few upper class rich people, a lot of the rich people disliked the working class and disrespected them. Among the political issues receiving the most attention at the time was the need to improve working conditions for the average English employee, and the question of voting for women. ...read more.

He is quick to suggest that Arthur is involved but he is slow to tell them why. The strange way that the Inspector goes about his business infuriates Mr Birling. The Inspector hints that he knows more than he's telling e.g. He implies that Sheila, Gerald and Eric also know something about Eva Smith and he also rarely answers questions precisely: "It might be" his business, he says. It turns out that Arthur Birling sacked Eva Smith from his factory due to his greed. She had asked Mr Birling for a pay rise from 22 shillings and 6 pence to 25 shillings. Then she went on strike with the other workers after he refused. He then sacked her after accusing her of being one of the four or five ringleaders. This shows that he doesn't think he should be responsible towards his workers and show them a bit of respect. Then Sheila got her sacked from her next job at a clothes shop called Milwards. Sheila went there one day in January and tried on a dress even though the shop assistants and her mother had suggested it wouldn't suit her. One of the shop assistants was Eva Smith and the dress suited her not Sheila as she was a pretty girl. When Eva smiled at another shop assistant, Sheila interpreted this as Eva saying: "Doesn't she look awful." This put Sheila into: "a furious temper" and she demanded that the girl be sacked. Despite this, Sheila feels guilty and is overcome by grief once the Inspector describes Eva's death. Sheila and Eric are on the side of Eva Smith when they here about her gruesome death. This is unlike their mother, father and Gerald, who show no sympathy whatsoever. Eric says Eva shouldn't have been sacked for showing a bit of: "spirit" and asking for higher wages. Sheila agrees with Eric that: "these girls aren't cheap labour, they're people." After Eva Smith got sacked from Milwards she changed her name to: "Daisy Renton". ...read more.

Eric says he's: "Ashamed of his parents", he tells his father he's: "not the kind of father a chap could go to when he's in trouble". He also has a real go at his mother: "you killed her - and the child she'd have had too - my child - your own grandchild." And he tells her she doesn't understand anything. When Gerald returns they start to wonder whether the Inspector was real because Gerald asked a policeman, who didn't know the Inspector, they also wondered if the pictures shown to each of them individually were the same or different pictures altogether. They find out that the Inspector doesn't exist by telephoning the police station and they phone the infirmary and it turns out that no girl died that night. But then the police ring. A girl has just died after swallowing some disinfectant. An Inspector is on his way... At the start of the play it appears to be a normal detective story but as the Inspector arrives about a suicide, the audience get to know the characters better and the story increases in complexity. As the Inspector interrogates each family member the story draws you in and it becomes more and more interesting with the Inspector slowly making the atmosphere more tense and full of suspense using responsibility and guilt. Priestley skilfully includes the themes of responsibility and guilt in the play; he does it in a manner that clearly informs the audience of his beliefs and cleverly tries to convert the audience to his way of thinking. He clearly does this in the Inspector's last speech: "the time will soon come when, if men will not learn that lesson, then they will be taught it in fire, blood and anguish." Here Priestley refers to World War 1. He is trying to convey the point that we all work together and help each other to try and make the world a better happier place. ?? ?? ?? ?? Muslim Stevenson D6-TA ...read more.