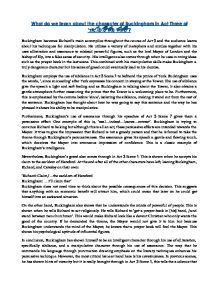 What do we learn about the character of Buckingham in Act Three of 'Richard the Third'? Buckingham becomes Richard's main accomplice throughout the course of Act 3 and the audience learns about his techniques for manipulation. He utilizes a variety of metaphors and similes together with his uses alliteration and assonance to mislead powerful figures, such as the lord Mayor of London and the bishop of Ely, into a false sense of security. His intelligence also comes through when he uses cunning ideas such as the prayer book in the last scene. This combined with his manipulative skills make Buckingham a truly dangerous character but his sense of greed could eventually lead to his demise. ...read more.

One example of this is, 'zeal...indeed...leaves...entreat'. Buckingham is trying to convince Richard to be king but although this is all an act, these persuasive effects are intended towards the Mayor. It tries to give the impression that Richard is not a greedy person and that he is forced to take the throne through Buckingham's persuasiveness. The assonance gives his speech a gentle and flowing touch, which deceives the Mayor into erroneous impression of confidence. This is a classic example of Buckingham's intelligence. Nevertheless, Buckingham's greed also comes through in Act 3 Scene 1. This is shown when he accepts his claim to the earldom of Hereford. At the end after all of the other characters have left, leaving Buckingham, Richard, and Catesby on their own: 'Richard: Claim/...the earldom of Hereford Buckingham: ... ...read more.

This shows his psychological aptitude of influential figures. In conclusion, Buckingham has shown himself to be an intelligent character through his use of alliteration, specifically sibilance, and a manipulative character through his use of assonance. The way that he commands his language through punctuation drawing emphasis on the literary techniques enhances his persuasive technique. However, the most critical issue at hand here is his covetousness. In previous scenes, he has shown hints of voracity but it is really brought through in Act 3 Scene 1, this tells the audience that although during Act 3 Buckingham is dominating the play, Buckingham may get to avaricious and try to break away from Richard, which could get him killed. ?? ?? ?? ?? ...read more.