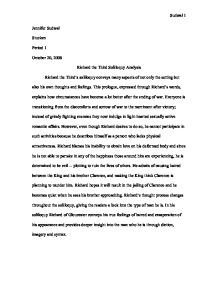 Jennifer Sudwal Stucken Period 1 October 20, 2008 Richard the Third Soliloquy Analysis Richard the Third's soliloquy conveys many aspects of not only the setting but also his own thoughts and feelings. This prologue, expressed through Richard's words, explains how circumstances have become a lot better after the ending of war. Everyone is transitioning from the discomforts and sorrow of war to the merriment after victory; instead of grimly fighting enemies they now indulge in light-hearted sexually active romantic affairs. However, even though Richard desires to do so, he cannot participate in such activities because he describes himself as a person who lacks physical attractiveness. Richard blames his inability to obtain love on his deformed body and since he is not able to partake in any of the happiness those around him are experiencing, he is determined to be evil -- plotting to ruin the lives of others. He admits of causing hatred between the King and his brother Clarence, and making the King think Clarence is planning to murder him. ...read more.

Richard uses such strong negative terms in order to display his misfortune, going as far as to say that even dogs find him repulsive. This strong word usage displays his anger and resentment at his own appearance, and may explain the motivation that he has to become a villain and ruin the lives of others. In addition, he predicts Clarence will be jailed if King Edward be as true and just As [he] is subtle, false, and treacherous"(36-37). As Richard expresses his hopes, he gives the impression that he is proud of his villainous characteristics. He talks of these negative traits with such ease that it seems as if he flaunts them. Richard the Third's language shows how he despises his unattractiveness to such an extent that it prevents him from experiencing happiness, and easily transforms him into a hateful being which he becomes boastful about. Richard provides very descriptive statements that express his attitude towards certain subjects. ...read more.

These statements convey thoughts that are not common and are usually spoken out in anger and irrationality. However, the lack of exclamations and the resulting emotional outburst show that he is calm and seems to have put thought into his stance on this situation. The syntax provides gives his words more substance and also show that Richard has some sort of control over his feelings. Richard of Gloucester's forty-word soliloquy gives much insight into his character and state of mind. The diction and imagery both explain his extreme loathing for his appearance, and how it led him to decide to become an evil man. The descriptions explain the importance a relationship has in Richard's perspective, and why the lack of one is so detrimental to his esteem. The syntax of the passage gives his statements weight, making them seem less like spontaneous irrational feelings and more like well-thought out decisions. Combined, the diction, syntax and imagery help form a more complete picture of Richard of Gloucester. Sudwal 1 ...read more.