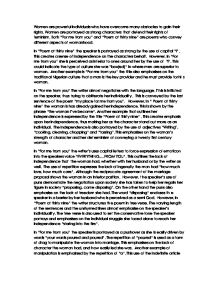 Women are powerful individuals who have overcome many obstacles to gain their rights. Women are portrayed as strong characters that defend their rights of feminism. Both "For me from you" and "Poem at thirty nine" are poems who convey different aspects of womanhood. In "Poem at thirty nine" the speaker is portrayed as strong by the use of capital "I". This creates a sense of independence on the characters behalf. However, in "For me from you" she is perceived as inferior to ones around her by the use of "i". This could indicate the type of culture she was "box(ed)" in where men are superior to woman. Another example is "For me from you" the title also emphasises on the traditional Nigerian culture that a man is the key provider and he must provide for his woman. ...read more.

This creates emphasis upon her independence, thus making her as the character stand out more as an individual. The independence is also portrayed by the use of adjectives "Writing", "cooking, cleaning, chopping" and "tossing". This emphasises on the woman's strength of character and her determinism of conveying a twenty first century woman. In "For me from you" the writer's uses capital letters to force expression of emoticon into the speakers voice "EVERYTHING.....FROM YOU". This outlines the lack of independence that the woman had, whether with her husband or by the writer as well. The use of repetition expresses the lack of ingenuity the man had "how much love, how much care". Although the reciprocate agreement of the marriage proposal shows the woman in an inferior position. ...read more.

In "For me from you" the speaker is portrayed as a pushover as she is easily driven by words "your words poured and poured". The repetition of "poured" is used as a form of drag to manipulate the woman into marriage. This emphasises on the lack of character the woman had, and how easily led she was. Another example of manipulation is emphasised by the repetition of "a". This use of the indefinite article could indicate the woman's struggle of escaping from the "box" which she has been boxed into by the culture. However, in "Poem at thirty nine" the use of enjambment emphasises on the complete freedom she as an individual had. The long sentences with lack of punctuation also are used to create that effect of freedom. ...read more.