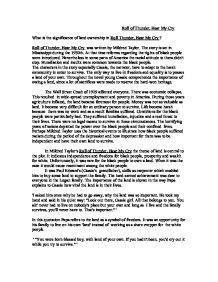 Roll Of Thunder By Mildred Taylor

Roll of Thunder, Hear My Cry What is the significance of land ownership in Roll Thunder, Hear My Cry ? Roll of Thunder, Hear My Cry was written by Mildred Taylor. The story is set in Mississippi during the 1930th. At that time reforms regarding the rights of black people were introduced. Nevertheless in some parts of America the racial attitude to them didn't stop. Humiliation and insults were common towards the black people. The characters in the story especially Cassie, the narrator, have to adapt to the harsh community in order to survive. The only way to live in freedom and equality is to posses a land of your own. Throughout the novel young Cassie comprehends the importance of owing a land, since a lot of sacrifices were made to reserve the hard-won heritage. The Wall Street Crash of 1929 affected everyone. There was economic collapse. This resulted in wide-spread unemployment and poverty in America. During those years agriculture inflated, the land became foremost for people. Money was not as valuable as land. It became very difficult for an ordinary person to survive. Life became harsh because there was no work and as a result families suffered. Conditions for the black people were particularly bad. They suffered humiliation, injustice and a real threat to their lives. There were no legal means to survive in those circumstances. ...read more.

The death of the trees indicates the loss which is un-bearable for the family. Taylor emphasises that Cassie loves the land and the feel of it. ' I was eager to be in fields again, to feel the furrowed rows of damp, soft earth beneath my feet; eager to walk barefooted through the cold forest, hug the trees, and sit under their protective shadow.' Mildred Taylor uses tactile imagery to convey Cassie's relation towards the 'fields and earth' belonging to her family. Cassie enjoys the tranquil environment surrounding her. The 'protective shadow' is a metaphor for the word shelter. It provides Cassie with comfort and harmony. Papa symbolises the 'fig tree' with the Logan achievement and success in surviving under the difficult conditions. 'You see that fig tree over yonder Cassie? Them other trees all around...that oak and walnut, they're a lot bigger and they take of more room and give so much shade they almost overshadow that little ole fig. But that fig tree's got roots that run deep, and it belongs in that yard as much as that oak and walnut...Just keeps on growing and doing what it gotta do. It don't give up. It give up, it'll die. There's a lesson to be learned from that little tree, Cassie girl, 'cause we're like it. We keep doing what we gotta, and we don't give up. ...read more.

The land conveys the Logan's history and memories they all share. The loss of it would make them mourn as they love every part of it. Papa's determination of keeping the land and defending his family is beyond the boundaries. He sets the fire on his land to defy the actions of T.J and save his family from a brutal attack. This manoeuvre unites the whole community. Suddenly a 'flood' of people rushes there to save the crop and 'each oblivious of the other'. The fire ascending on the land is an emergency for all the people; from the white racists to the black farmers. The conflict between Papa and Mr Granger was put aside as both of them 'got them men diggin' a deep trench'. The 'ranks' of the fire fighters also differed. They 'swelled from the two dozen townsmen to include nearby farmers' 'folks thinking that lightning struck that fence of yours and started the fire' In this quotation Mildred Taylor shows that all the 'folks' 'knew and understood the meaning of' fire. However this was the device when 'known and unknown things, never to be spoken'. At the end of the novel Cassies impetuosity is replaced with the bitter tears. She understands the significance of the land in her life. 'I cried for T.J. For T.J. and the land.' Cassie's perception of the land changed and the recognition towards it shows her spiritual maturity. She understood that the land is a treasure for her family and it provides comfort for all of them. ...read more.