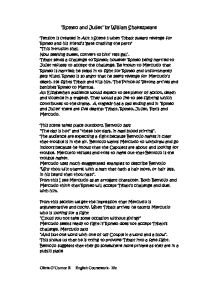 ‘Romeo and Juliet’ by William Shakespeare

Tybalt sends a challenge to Romeo; however Romeo being married to Juliet refuses to accept the challenge. Be known to Mercutio that Romeo is married; he steps in to fight for Romeo and unfortunately gets killed. Romeo is so angry that he seeks revenge for Mercutio’s death. He fights Tybalt and kills him. The Prince of Verona arrives and banishes Romeo to Mantua.

An Elizabethan audience would expect to see plenty of action, death and violence in a tragedy. They would also like to see fighting which contributes to the drama.  A tragedy has a sad ending and in ‘Romeo and Juliet’ there are five deaths: Tybalt, Romeo, Juliet, Paris and Mercutio.

“The day is hot” and “these hot days, in mad blood stirring”.

The audience are expecting a fight because Benvolio makes it clear that trouble is in the air. Benvolio wants Mercutio to withdraw and go indoors because he knows that the Capulets are about and looking for trouble. Mercutio refuses and tries to make out that Benvolio is the trouble maker.

“Why thou wilt quarrel with a man that hath a hair more, or hair less, in his beard than thou hast”.

From this I see Mercutio as an arrogant character. Both Benvolio and Mercutio think that Romeo will accept Tybalt’s challenge and duel with him.

From this section we get the impression that Mercutio is argumentative and cocky. When Tybalt arrives he taunts Mercutio who is looking for a fight

“Could you not take some occasion without giving?”

“And but one word with one of us? Couple it a word and a blow”.

This shows us that he is trying to provoke Tybalt into a fake fight. Benvolio suggests that they go somewhere more private as they are in a public place

“Here all eyes gaze up on us”.

This reminds the audience of the Prince’s proclamation:

“If ever you disturb our streets again,

Your lives shall pay the forfeit of the peace”

The audience begins to sense that somebody is going to die as a result of feud between the families and are intrigued as to what will happen next.

When Romeo arrives Tybalt provokes him, insulting him calling him a “villain” and a “boy”.

The audience expects Romeo to be angry and come to terms with Tybalt.

The audience knows about the marriage, but the other characters do not. This creates tension as we wonder how Romeo is going to deal with the situation. Romeo tries to make peace with Tybalt

“I do protest I never injured thee,

But love thee better than how thou canst devise”.

Mercutio is angry with Romeo, thinking him a coward

Shakespeare uses dramatic irony. Romeo does not want to injure Tybalt because they are cousins, however Tybalt does not know this. Juliet would be upset if Romeo killed Tybalt.

Mercutio decides to fight Tybalt instead.  Romeo steps in and tries to stop the fight and Tybalt kills Mercutio under Romeo’s arm.

“A plague on both your houses”

The Elizabethan audience would be superstitious and hear this as a curse. Plagues in Elizabethan times killed many people. By Mercutio saying this, the audience become confused because Mercutio being a Montague should only call down plagues on the Capulets because the two families are feuding. At first we believe that Mercutio has only a ‘scratch’, but we later realise he is badly injured and going to die

‘They have made worm’s meat of me’.

The audience supposes that Romeo will be furious that Tybalt has killed his best friend and will seek revenge. They watch eagerly as there could be another killing! Effectively, Mercutio’s death ends Friar Laurence’s hope for peace between the two families.

Romeo thinks that Mercutio’s death is his fault,

“In my behalf, my reputation stained

This means that Romeo believes that if he had fought Tybalt then Mercutio would still be alive.

The audience realises that Romeo is deeply upset and very angry. He talks of his

As he seems to no longer be in control.

Romeo’s mood and behaviour are now different from the beginning of the scene when he did not want to fight. Romeo goes after Tybalt seeking revenge; Romeo fights Tybalt and kills him.

“Stand not amazed, the prince will

Again, the audience is reminded of the Prince’s warning should anyone be caught fighting in the street.

Tension is raised as the audience wonders how the Prince will punish Romeo.

“For blood of ours, shed blood of Montague”

“Romeo must not live”

The audience eagerly wait to see if the Prince will condemn Romeo to death. Romeo spends his final night in Verona with Juliet, at dawn the next day he flees to Mantua.

“A plague on both your houses”.

This curse comes true to the extent that Romeo, Juliet, Paris and Mercutio die. Romeo says

“This days black fate on moe days doth depend”.

This makes the audience think that after this scene of violence there are going to be serious repercussions.

The Prince banishes Romeo to Mantua

“We do exhile him hence”

This scene ends on a note of suspense.

I think that Act 3 Scene 1 is a very action packed scene. There is a lot of fighting and as a result death which is a key ingredient in any good tragedy.

I also think that there are hints that there will be more killing and sadness in future scenes. Romeo admits

“I’m fortunes fool” and he appears to be acting hastily without considering the consequences.