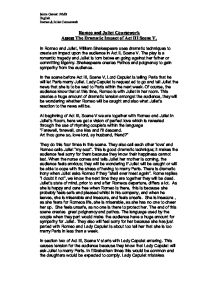 Romeo and Juliet Coursework Assess The Dramatic Impact of Act III Scene V. In Romeo and Juliet, William Shakespeare uses dramatic techniques to create an impact upon the audience in Act II, Scene V. The play is a romantic tragedy and Juliet is torn between going against her father or committing bigamy. Shakespeare creates Pathos and poignancy to gain sympathy from the audience. In the scene before Act III, Scene V, Lord Capulet is telling Paris that he will let Paris marry Juliet. Lady Capulet is requested to go and tell Juliet the news that she is to be wed to Paris within the next week. Of course, the audience know that at this time, Romeo is with Juliet in her room. This creates a huge amount of dramatic tension amongst the audience, they will be wondering whether Romeo will be caught and also what Juliet's reaction to the news will be. At beginning of Act III, Scene V we are together with Romeo and Juliet in Juliet's Room, here we get a vision of perfect love which is revealed through the use of rhyming couplets within the language "Farewell, farewell, one kiss and I'll descend. ...read more.

He also creates a lot of drama throughout the play with his strong and dramatic language, for example, "Speak not, reply not, do not answer me; my fingers itch". and the way he uses this type of language shows us that he is the man of the house. He also seemed to have two personalities depending on the atmosphere at the time. He told Juliet that she would marry Paris, "The County Paris, at Saint Peters church, shall happily make thee there a joyful bride" and when Juliet refuses, Lord Capulet's mood changes dramatically because he is the man of the house and expects Juliet to do what she is told, this made this part of the play more dramatic and exciting. Lord Capulet uses his strong language to insult Juliet, he said, "Hang thee, young baggage, disobedient wretch!" this showed Lord Capulet's superiority over Juliet. At first, he seemed as though he cared about Juliet while she was crying, but when she refused to marry Paris his anger became uncontrollable. This shows contrast to his temper when he found out that Romeo was at the feast when he was not even invited, and stopped Tybalt making a scene because of the different family names they had. ...read more.

Next she gets upset, because she fears that he will be killed if he leaves her. She bursts into tears when he leaves, and her family thinks that she is grieving for her cousin, which makes her more upset, as it was her Romeo who killed her cousin. Next she gets even more upset, as her father tells her that she has to marry Paris, but she is so scared of her father that she can't tell him that she is already married to Romeo, so she just says that she is not ready. Near the end of the argument, she is angry and very upset, because her father is threatening to disown her. By the end, she can't even trust the nurse, one of the closest people to her. Finally, she is so upset, that she considers suicide just to get out of marrying Paris, and so she wouldn't have to worry about her father, mother, nurse, family or Romeo. This leaves the scene on a cliff-hanger and will create a lot of tension. It is one of the most upsetting and depressing scenes of the whole play and Shakespeare uses a wide range of language to create pathos and poignancy so that the audience are able to sympathise with the characters. Jaime Garrett 10MB English Romeo & Juliet Coursework ...read more.