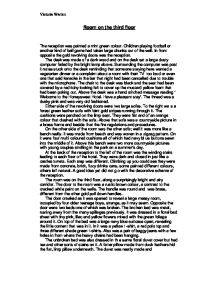 Room on the third floor

Room on the third floor The reception was painted a mint green colour. Children playing football or another kind of ball game had taken large chunks out of the wall. In front opposite the gold revolving doors was the reception. The desk was made of a dark wood and on the desk sat a large dusty computer faded by the bright lamp above. Surrounding the computer was post it notes stuck onto the desk reminding that someone staying here wanted a vegetarian dinner or a complaint about a room with their TV too loud or even one that said karaoke in the bar that night had been cancelled due to trouble with the microphone. The chair to the desk was black and the seat had been covered by a red itchy looking felt to cover up the mustard yellow foam that had been poking out. Above the desk was a hand stitched message reading ' Welcome to the Honeysweet Hotel. Have a pleasant stay'. The thread was a dusky pink and was very old fashioned. Either side of the revolving doors were two large sofas. To the right was a forest green leather sofa with faint gold stripes running through it. The cushions were perched on the limp seat. They were flat and of an orange colour that clashed with the sofa. Above that sofa was a countryside picture in a brass frame and beside that the fire regulations and procedures. ...read more.

Between the two beds was a large, open wooden chest showing its blood red velvet upholstering inside. In this chest was a pair of black, chunky skate trainers with a pink sort of squiggle across it. Next to the trainers was a glass photo frame. The photo was of the four boys staying here. Tom had blonde hair and his face was scrunched up showing his teeth. He was wearing a black t-shirt with something printed on it, which was unreadable because his arms were outstretched, right arm punched downwards, left arm punched towards the ceiling. Danny was next in the photo with dark brown hair. He was wearing a bright red t-shirt with a yellow motorbike on it. He was also wearing a beaded necklace and matching bracelets. On the other arm were green, orange and pink plastic bracelets. His arms were crossed at the wrist and both index fingers were pointing upwards and he was looking down towards the floor. Dougie was next in the picture with his dyed blonde hair. His right arm was stretched up but the photo had cut off the top of his arm. He was wearing a black 'Macbeth' t-shirt and beige trousers held up by a black belt with a silver buckle. The belt wasn't doing a great job as you could see his blue and white stripy boxers. Harry was last in the photo. ...read more.

Both were made from wood and covered in a plastic marble substitute. On the left side there was a microwave and on top of tat was an empty fruit bowl. There was also a kettle, a box of herbal tea bags and two dirty mugs. At the end of that worktop was a double sink unlike the rest of the room it was clean and you could see your reflection in the stainless steel it was made from. On the right side were three cupboards with the cutlery and crockery in it as well as a few saucepans. Below the cupboard was the worktop, which had tub of butter, knife and chopping board on it. The bathroom was on the other side of the main room. It was dark and dingy because it had no windows. There were the basics a bath, toilet and sink with a mirror propped up by the various hair and bath products and aftershaves. The bathroom suite was a pale caramel colour. In the bath was the remains of the last person in there and a little yellow rubber duck. On the edge of the bath were shampoos and shower gels balancing there. Overall this hotel room was dirty and messy and obviously hadn't been cleaned in a few weeks, but who cared certainly not me. I was in Mcfly's hotel room waiting to meet them and be the envy of all my friends even though they weren't my favourite band I would still be excited when the walked through that door to meet me. Victoria Warren ...read more.