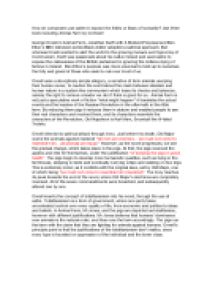 Satire in Animal Farm, A Modest Proposal and Blackadder

﻿How do composers use satire to expose the follies or flaws of humanity? Use three texts including Animal Farm by G.Orwell George Orwell in Animal Farm, Jonathan Swift with A Modest Proposal and Ben Elton's BBC television series Black Adder adopted a satirical approach. But whereas Orwell wanted to alert the world to the growing menace and hypocrisy of Communism, Swift was passionate about his native Ireland and used satire to expose the callousness of the British parliament in ignoring the millions dying of famine in Ireland. Ben Elton's purpose was more universal to hold up to ourselves the folly and greed of those who seek to rule over most of us. Orwell uses a deceptively simple allegory, a narrative of farm animals usurping their human owner, to caution the world about the clash between idealism and human nature in a system like communism which loses its checks and balances, namely the right to remove a leader we don't think is good for us. ...read more.

Mr Jones believes that humans? dominance over animals is the natural order, and thus runs the farm accordingly. The pigs run the farm with the claim that they are fighting for animals against humans. Orwell?s principle point is that the justifications of the totalitarianism don?t matter, since every type is founded on oppression of the individual and the lower class. A modest proposal written by the prolific pamphleteer, Jonathan Swift is also a satire even more biting than the novel Animal Farm. Unlike Orwell?s animal fable, Swift adopts a completely different medium, to mirror the flaws of society, using an economist?s pamphlet to ridicule the oppression and exploitation of the Catholic Irish peasants by the English Protestants. In a response to the flaws of society, Swift promoted the idea of fattening Irish babies to sell on the meat market, much like piglets, ?A young health child well nursed is at a year old a most delicious, nourishing and wholesome food.? This odious comparison (of babies for food) ...read more.

In the final episode of the series, ?Goodbye,? Field Marshall Haig is playing with toy soldiers. This is satirizing the general?s perspective of warfare, and apart from it being hilarious, it just proves what the generals were like. They thought it was a game, shown as Haig knocks over a handful of plastic soldiers in his model battlefield. Blackadder satirizes the advancement and progress of the army at war. ?We?ve advanced as far as an asthmatic and with heavy shopping.? Apart from the humorous comparison, it satarises how far the army has progressed with such stupid and out of date tactics, as well as childish generals. This relates highly to World War One, where the army progressed about a few inches a year, as the generals didn?t know what to do. Thus, in George Orwell?s Animal Farm, Jonathan Swift?s A Modest Proposal and Ben Elton?s Blackadder, the shortcomings of mankind are reflected in an distorted mirror of society, one that is later polished clean to reveal a much more offensive reality. Ultimately, each author conveys the ability of satire to inspire and evoke change. ...read more.