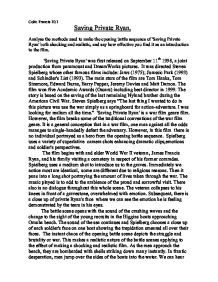 'Saving Private Ryan' was first released on September 11th 1998, a joint production from paramount and DreamWorks pictures.  It was directed Steven Spielberg whose other famous films include: Jaws (1975); Jurassic Park (1993) and Schindler's List (1993). The main stars of the film are Tom Hanks, Tom Sizemore, Edward Burns, Barry Pepper, Jeremy Davies and Matt Damon. The film won five Academic Awards (Oscars) including best director in 1999. The story is based on the saving of the last remaining Nyland brother during the American Civil War. Steven Spielberg says “The last thing I wanted to do in this picture was use the war simply as a springboard for action-adventure. I was looking for realism all the time.”  'Saving Private Ryan' is a war film genre film. However, the film breaks some of the traditional conventions of the war film genre. It is a general conception that in a war film, one man against all the odds manages to single-handedly defeat the adversary. However, in this film  there is no individual portrayed as a hero from the opening battle sequence.  Spielberg uses a variety of superlative  camera shots enhancing dramatic clips,emotions and soldier's perspectives.

The film begins with and elder World War II veteran, James Francis Ryan, and his family visiting a cemetery in respect of his former comrades. Spielberg uses a medium shot to introduce us to the graves. Immediately we notice most are identical,  some are different due to religious reasons. Then it pans into a long shot portraying the amount of lives taken through the war. The music played is to add to the ambience of the proud and sorrowful visit. There also is no dialogue throughout this whole scene. The veteran collapses to his knees in front of a gravestone, overwhelmed with emotion. Subsequent, there is a close up of private Ryan's face  where we can see the emotion he is feeling demonstrated by the tears in his eyes.

The battle scene opens with the sound of the crashing waves and the change to the sight of the young recruits in the Higgins boats approaching Omaha beach. The sound of the sea continues and Spielberg chooses a close up of each soldier's face on one boat showing the trepidation smeared all over their faces.  The instant chaos of the opening battle scene depicts the struggle and brutality or war. This makes a realistic nature of the battle scenes applying to the effect of making a shocking and realistic film. As the men approach the beach, they are bombarded with shells striking down many instantly. In frantic desperation, men jump over the sides of the boats into the water. We can hear the sound of bullets and anguished cries as the Nazis the brutal killing of the innocent. Following on, we get an under-water camera shot. This is particularly effective as we get the perspectives of the soldiers. We also get a camera shot over the Nazis shoulder, killing soldiers at an extremely high rate. It shows us how easy it is for the Germans to kill them and how badly the Americans are loosing the battle.   One man is shot and blood flows out into the water reinforcing the brutality of war with its shocking realism.

As Captain Miller staggers out of the sea, there is a close up on him. We see desperation and bewilderment on his face. Spielberg's use of colours to represent images is used a lot throughout this scene. The sea water around him red- filled with blood. Spielberg's use of colour exhibits the mammoth amount of wounds. For a few moments in Captain Miller's perspective, there is a deafening silence, blocking out the anguished cries and bullets. He then puts on his helmet which is filled with blood. As he puts it on his head, blood of other soldiers runs down his face. This strong image tells us he has bigger concerns. A man  is pacing, screaming, holding his own arm as it has been blown off. From these images, heroism of war is displayed as an old wives tale.

Approaching the end, Captain Miller and his fellow soldiers gain control over the Germans. Germans are surrendering however, some are shot in the fury of the moment punishing them. Some were falling out of a burning bunker. These images are examples of American brutality. Finally they manage to finish off the Germans. Looking over the battlefield, the sergeant says “ That's quite a view” This is to express the amount of damage and killed due to the vile, vicious and vulgar war. As the battle scene finishes, the camera zooms in on a backpack with “Ryan” on the back. This is not Private James Francis Ryan, but his brother. This image is powerful as it builds the story.

In my response to the film, I fell the opening sequence does prepare for what follows in the film. The instant chaos depicts the brutality and struggle of war. This opening scene sets the story in a shocking realistic way. I found the images and use of colour particularly effective. It made it more shocking and realistic and in my opinion Steven Spielberg did succeed in making a film to portray chaos. I think this film is superlative because the use of camera shots and brutality gives a first person perspective of war.