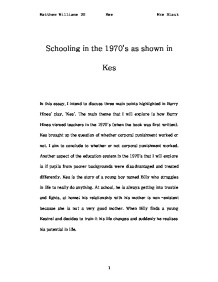 Schooling in the 1970's as shown in Kes In this essay, I intend to discuss three main points highlighted in Barry Hines' play, 'Kes'. The main theme that I will explore is how Barry Hines viewed teachers in the 1970's (when the book was first written). Kes brought up the question of whether corporal punishment worked or not. I aim to conclude to whether or not corporal punishment worked. Another aspect of the education system in the 1970's that I will explore is if pupils from poorer backgrounds were disadvantaged and treated differently. Kes is the story of a young boy named Billy who struggles in life to really do anything. At school, he is always getting into trouble and fights, at home; his relationship with his mother is non-existent because she is not a very good mother. When Billy finds a young Kestrel and decides to train it his life changes and suddenly he realises his potential in life. One of the main differences from our education today that is shown in Kes is how the teachers treat and act towards their pupils. In this section, I will explore how the play depicts teachers in the 1970's. The headmaster, Gryce, is an excellent example of how the typical 1970's teacher is viewed. ...read more.

This shows that either the P.E system only taught football or that the teacher was lazy and enjoyed football. I believe that it is the later. There are two other quotes in the same page that back my point up. One of the boys says, "We haven't been in the gym for years now" (Page 30). This quote gives the impression that all they have been doing for years is football. "Other classes do basketball sometimes"(page 30). This tells us that it is the teacher's own decision not to do anything else but football. When the teacher arrives (late) you can tell straight away that he is not the nicest of teachers. On the contrary, he takes the first opportunity of humiliating Billy that he can. Billy tells him that he does not have a kit. Sudgen mimics him saying, "Please Sir, I've got no kit"(page 31). This is evidence that again this teacher does not care about his pupils and I think he enjoys making fun of him. In addition, when Sudgen goes looking for a kit for Billy "He goes into his room and brings out a giant pair of drawers." They obviously will not fit him. I think that there were probably shorts in his room that would have fitted Billy but instead of getting them, he purposely brought out a giant pair to embarrass him. ...read more.

In scene 14 the P.E Changing Room Billy informs he teacher, Sudgen that he has no kit. Sudgen goes into a rage and starts making fun of Billy for not having a kit. "You've skived and scrounged and borrowed and... Why is it that everyone else can get some, but you can't?" The reason he does not have any kit is that his parents do not have enough money to buy him one. The teacher will know this and is just being cruel to him. This shows that children who were poorer were disadvantaged when it came to school. Having explored the main points of teachers in the 1970's shown in Kes I have concluded that although there is a few dreadful teachers there are good teachers as well. Gryce and Sudgen being the worse teachers and Mr Farthing being a great teacher. I concluded that Corporal punishment did not work although I thought it did in a way because I felt it worked well on pupils who were not getting into trouble very often like the messenger but for pupils like Macdowall the belt would not be so bad as they would get quite used to it eventually. Pupils from poorer backgrounds were disadvantaged in their education I felt, mainly because they had a bigger reputation for getting into trouble and not really for being poor. ?? ?? ?? ?? Matthew Williams 3E Kes Mrs Black 1 ...read more.