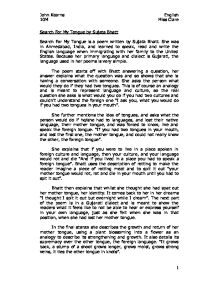 Search for my toungue by Sasha Bhatt

Search For My Tongue by Sujata Bhatt Search For My Tongue is a poem written by Sujata Bhatt. She was in Ahmedabad, India, and learned to speak, read and write the English language when immigrating with her family to the United States. Because her primary language and dialect is Gujarati, the language used in her poems is very simple. The poem starts off with Bhatt answering a question, her answer explains what the question was and so shows that she is having a conversation with someone. She asks the person what would they do if they had two tongues. This is of course an analogy and is meant to represent language and culture, so the real question she asks is what would ...read more.

"If you had two tongues in your mouth, and lost the first one, the mother tongue, and could not really know the other, the foreign tongue". She explains that if you were to live in a place spoken in foreign culture and language, then your culture, and your language would rot and die "And if you lived in a place you had to speak a foreign tongue". Bhatt uses the description of rotting to make the reader imagine a piece of rotting meat and to spit it out "your mother tongue would rot, rot and die in your mouth until you had to spit it out". ...read more.