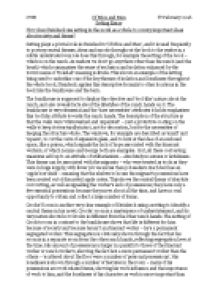 Setting plays a pivotal role in Steinbecks Of Mice and Men, and it is used frequently to portray central themes, ideas and moods.

Transfer-Encoding: chunked ﻿CWK Of Mice and Men 6th February 2016 Setting Essay How does Steinbeck use setting in the novel as a whole to convey important ideas about society and theme? Setting plays a pivotal role in Steinbeck?s ?Of Mice and Men?, and it is used frequently to portray central themes, ideas and moods throughout the book to the reader in a subtle understated way. He does this through, for example the setting of the book ? which is on the ranch. As readers we don?t go anywhere other than the ranch (and the brush) which summarises the sense of seclusion and isolation enhanced by the town?s name of ?Soledad? meaning solitude. This shows an example of the setting being used to underline one of the key themes of isolation and loneliness throughout the whole book. Steinbeck applies this descriptive formula to other locations in the book like the bunkhouse and the barn. The bunkhouse is supposed to display the objective and ?tool-like? nature about the ranch, and also reveals facts about the lifestyles of the ranch hands on it. ...read more.

This segregation is obviously shown through the fact that his room is in a separate room from the other ranch hands, reflecting segregation laws at the time. His amount of possessions is larger in quantity to those of the itinerant worker or ranch worker?s, showing the fact he?s a more permanent worker than the others ? ?scattered about the floor were a number of personal possessions?. His loneliness is shown through a number of features in the room ? many of his possessions are work related items, showing his work influence and the importance of work to him, and the loneliness of his character as work is more important than his livelihood. The close alignment with the horses also reflects the main theme of loneliness. The room itself is just a shed off of the horse barn, his bed was ?a long box filled with straw? much like a manger, his apple box contained ?a range of medicine bottles, both for himself and for the horses?. All of this shows the loneliness of Crooks because of racism and segregation that at the time was the social norm; and perhaps Crooks was seen as being on a similar level of respect to the horses. ...read more.

Despite this the values of the settings have changed. Instead of a place of sanctuary, the Garden of Eden, the pool is now a place of death. Instead of animals such as rabbits playing in the brush, the heron is now swallowing the water snake ? devouring it. Instead of green leaves and a gentle breeze, there are brown dying leaves and a gush of wind ? hallmarks of a storm. Instead of safety for Lennie, there is death, and for George, a future of loneliness without his companionship shared with Lennie. The key themes and motifs built up by previous scenes in the novel are tied up here ? the microcosm of life, the loneliness, selfish, cruel brashness of the world. The fact that the cycle of settings is used, that they?re back in the brush at the end as they were in the beginning shows that nothing has changed for the better in George and Lennie?s life, much the same as itinerant workers just like them. It shows the microcosm of life ? everyone is selfish and wants to make it on their own that no one actually in the end ends benefiting ? in short, if this attitude is held, everyone?s a looser. ...read more.