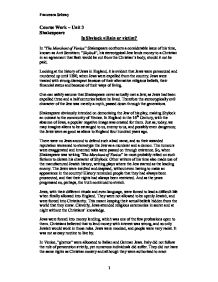 Shakespeare - Is Shylock villain or victim In

Course Work - Unit 3 Shakespeare Is Shylock villain or victim? In "The Merchant of Venice" Shakespeare confronts a considerable issue of his time, known as Anti Semitism. "Shylock", his stereotypical Jew lends money to a Christian in an agreement that flesh would be cut from the Christian's body, should it not be paid. Looking at the history of Jews in England, it is evident that Jews were persecuted and murdered up until 1290, when Jews were expelled from the country. Jews were treated with strong disrespect because of their alternative religious beliefs, their financial status and because of their ways of living. One can safely assume that Shakespeare never actually met a Jew, as Jews had been expelled three and a half centuries before he lived. Therefore the stereotypically evil character of the Jew was merely a myth, passed down through the generations. Shakespeare obviously intended on demonising the Jew of his play, making Shylock an outcast to the community of Venice. In England in the 16th Century, with the absence of Jews, a popular negative image was created for them. Just as, today, we may imagine aliens to be estranged to us, enemy to us, and possibly even dangerous; the Jews were as good as aliens to England four hundred years ago. There were no Jews around to defend such a bad name, and so their awarded reputation worsened to stereotype the Jew as a murderer and a demon. The rumours were exaggerated and invented tales were passed on through existence. So, when Shakespeare was writing "The Merchant of Venice" he most probably relied on such fictions to dictate his character of Shylock. ...read more.

I will buy with you, sell with you, talk with you, walk with you and so following; but I will not eat with you, drink with you, nor pray with you." By religion, Shylock is not permitted to eat pork, as it was thought that the pig possessed the devil. Shylock tells Bassanio that he will only conduct business with him. The Jew will not socialise as friends, because of their alternative beliefs. Bassanio here is conveyed as an impartial, unprejudiced gentleman, for it is doubtful in my mind that any of the other characters would ever have suggested dinner. "I hate him for he is a Christian", Shylock declares at Antonio's entrance. Jews were thought to despise the Christian society, and this quote conveys the Jew as a true villain. One can again envisage substantial audience participation as the infamous enemy belittles their Christian race. "But more for that in low simplicity he lends out money gratis", Shylock continues, assessing that religious distinctions appear to be less vital than professional envy. Shylock embraces more abhorrence for the Christian on account of money affairs, than that of alternative beliefs. "Cursed be my tribe" Shylock goes on to say, again a noteworthy claim that he is diverse. Throughout the play Shakespeare persists in reminding his addressees that Shylock is undeniably a Jew, and an adversary to Christians ubiquitously. The quotation "My tribe" alienates Shylock exceedingly, suggesting that the Jew deems himself to be an element of a superior, elite power. Shylock reinstates his theory barely moments after with, "Tubal, a wealthy Hebrew of my tribe". Towards the closing stages of the play Shylock is pictured in court in an appeal to slice flesh from a Christian's body, sharpening a knife on the sole of his shoe as he anticipates inauguration. ...read more.

As Shylock learns of his daughter's elopement the audience is drawn to temporarily feel strong remorse as the Jew questions his humanity. Shakespeare meant for the audience to despise Shylock. He was written to portray the evil character of the plot, and legend read that the Jew was an evil character in itself. Shakespeare never intended on changing worldly views on Judaism, but merely wanted a wicked character to challenge Christianity. It is almost certain that nobody at that time had actually met a Jew, and so using the Jewish name, and wearing what were thought to be Jewish clothes, and hating the myth of the Jewish person was all done in jest. Shakespeare managed to create a character that his audience could participate with. The inhuman wretch of a man, inhuman not solely because of his religion, but also because of his profession and want of money. The audience had definitely heard dreadful anecdotes of the Jewish nation for most of their lives, and Shakespeare only meant to transmit a caricature of somebody they may have always imagined. Shylock is undoubtedly portrayed as the villain, and the one solitary victimising scene showed the audience that Jews are real people, and not aliens. Real as they are though, they are treacherous and evil. The play results in the Christians getting their justice, as the entire audience would have hoped for. Today, of course, Jews are universally accepted as equals and there are no laws written which could ever substitute a person's religion for another. Attitudes to Jews are entirely different today, and modern productions of "The Merchant of Venice" show Shylock more as the victim who lost everything because of persecution as a Jew. Francesca Selway 1 ...read more.