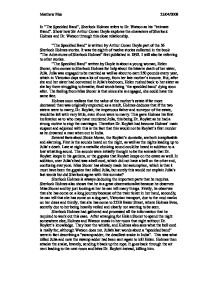 In "The Speckled Band", Sherlock Holmes refers to Dr. Watson as his "intimate friend". Show how Sir Arthur Conan Doyle explores the characters of Sherlock Holmes and Dr. Watson through this close relationship. "The Speckled Band" is written by Arthur Conan Doyle part of the 56 Sherlock Holmes stories. It was the eighth of twelve stories collected in the book "The Adventures of Sherlock Holmes" first published in 1892. I will also be referring to other stories. "The Speckled Band" written by Doyle is about a young woman, Helen Stoner, who comes to Sherlock Holmes for help about the bizarre death of her sister, Julia. Julia was engaged to be married as well as about to earn 250 pounds every year, which in Victorian days was a lot of money, from her late mother's income. But, after she and her sister had conversed in Julia's bedroom, Helen rushed back to her sister as she lay there struggling to breathe; final words being 'the speckled band' dying soon after. ...read more.

Sherlock Holmes also shows that he is a great observationalist because he observes Miss Stoner and by just looking at her he can tell many things. Firstly, he observes that she has come on a long journey because of the train ticket in her hand, secondly, he can tell that she has come on a dog cart, Victorian transport, due to the mud marks on her dress and thirdly, that she has come to 221B Baker Street, where Holmes lives, secretly due to her being heavily veiled and clearly not wanting to be seen. Sherlock Holmes had gathered and processed all the information that he required to work out this case. After arranging for Helen Stoner to spend the night somewhere else, Holmes and Watson sneak in her room that night without Dr. Roylett's knowledge. They hear the whistle, and Holmes also sees what the bell cord is really for, although Watson does not. Julia's last words about a "speckled band" were in fact describing a "swamp adder, the deadliest snake in India". ...read more.

This is why it is common to hear that in detective stories the partner is described as 'Watson' As Watson is the narrator of the stories, we hear things from his point of view, referring to Holmes as his friend, for example in the introduction to "The Blue Carbuncle," 'I had called upon my friend Sherlock Holmes.' This is an inclination of just how close Watson believes his relationship to be with Sherlock Holmes. Often in Doyle's stories he will prelude his stories with a short piece from Watson, regularly introducing the story, describing the time and setting in which the story is based. The inclusion of this preface means that the reader can see the development of Watson's affections to Holmes. A point about Holmes is that it seems that Watson is his only friend due to his independent and single mindedness. Holmes does have associates though but as Watson can manipulate the views of Holmes, they have become friends. The historical setting in the story is Victorian, the 19th century. ...read more.