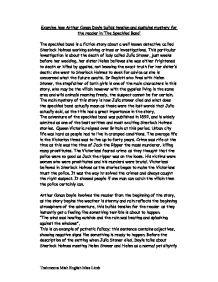 Examine how Arthur Conan Doyle builds tension and sustains mystery for the reader in 'The Speckled Band' The speckled band is a fiction story about a well known detective called Sherlock Holmes working solving crimes or investigations. This particular investigation is about the death of lady called Julia Stoner, just weeks before her wedding, her sister Helen believes she was either frightened to death or killed by gypsies, not knowing the exact truth for her sister's death; she went to Sherlock Holmes to seek for advice as she is concerned what the future awaits. Dr Roylott who lives with Helen Stoner, the stepfather of both girls is one of the main characters in this story, who may be the villain however with the gypsies living in the same area and wild animals roaming freely, the suspect cannot be for certain. The main mystery of this story is how Julia stoner died and what does the speckled band actually mean as these were the last words that Julia actually said, as the title has a great importance in the story, The adventure of the speckled band was published in 1892, and is widely admired as one of the best written and most exciting Sherlock Holmes stories. Queen Victoria reigned over Britain at this period. Urban city life was hard as people had to live in cramped conditions. The average life in the Victorian times was to live up to forty years. ...read more.

Helen explains the mysterious death, in such depth; this creates tension because the reader wants to know how all the clues can be linked up to solve the mystery. Sherlock asks questions about the bell rope and the saucer of milk, this creates tensions as it hints to the reader that these clues are somehow have a connection to the mystery as he is interested in these objects for a reason. Doyle builds tensions through Dr Roylott as he is portrayed as the villain from the beginning, as Helen is describing him, "a series of disgraceful brawls took place...until at last he became the terror of the village..." this sentence creates more tensions as he is represented as the bad character, however the gypsies are also mentioned in the story, there is also a light chance they may be to blame as they are stereotyped as people who are ill mannered and have no respect and also there are many clues linked to the gypsies being the villain, "Sometimes I have thought that it was merely the wild talk of delirium, sometimes that it may have referred to some band of people. I do not know whether the spotted handkerchiefs which so many of them wear over their heads might have suggested the strange adjectives which she used". This quote adds mystery as the gypsies also fit the character of the villain, ill mannered, violent and also fit in the clues. ...read more.

"She stabbed her finger into the air in the direction of the doctor's room", this sentence is a big clue that her death is obviously related to Dr Roylott's room or she would never have pointed towards his room. When Dr Roylott is inspecting the room, this has a great importance to the story as this part of the story slowly unveils the important clues to solve the mystery. When Holmes is inspecting the room he finds out about the ventilator and wonders if this links with Julia's death. He works out that Dr Roylott has a cheetah living in his room as there is a saucer of milk and a leash. The part of the story where the reader fears fro Helen is when she returns home after visiting Sherlock Holmes, the reader is informed about Dr Roylott's anger and are worried what Dr Roylott may do to Helen when she returns home. Towards the end of the story the mystery is solved, Dr Roylott had been training the deadliest snake in India to climb through the ventilator and to return when hearing a whistling noise. The speckled band relates to the snake as the snake had a 'particular yellow band with brownish speckles'. At the end of the story the reader feels relieved that Dr Roylott has been caught and also that he is dead, so he cannot cause any more trouble to anyone the villagers or any more distress to Helen. This is a typical ending as the villain is caught and is dead, therefore cannot continue to cause any more misery. ?? ?? ?? ?? Thahmeena Miah English Miss Limb ...read more.