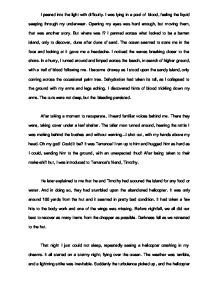 I peered into the light with difficulty. I was lying in a pool of blood, feeling the liquid seeping through my underwear. Opening my eyes was hard enough, but moving them, that was another story. But where was I? I panned across what looked to be a barren island, only to discover, dune after dune of sand. The ocean seemed to stare me in the face and looking at it gave me a headache. I noticed the waves breaking closer to the shore. In a hurry, I turned around and limped across the beach, in search of higher ground, with a trail of blood following me. I became drowsy as I stood upon the sandy island, only coming across the occasional palm tree. Dehydration had taken its toll, as I collapsed to the ground with my arms and legs aching. I discovered hints of blood trickling down my arms. ...read more.

Another day dawned. Terrance had prepared breakfast, making use of last night's scavenging. Disbelief grew inside me as resources ran low. However, going for a walk didn't seem to cure anything with my arms and legs perilously aching again. As I panned across the area, a trail of empty chip packets caught me eyes, ones that I had salvaged! There he was, hiding in the distance, Timothy! The little bastard was munching away; he didn't even notice me, gorging himself with food. I walked back in disgust, and confronted Terrance, informing him of the issue. The days went on, and we were only left with two bottles of milk and a single Jar of Horlicks. With no food and only water in abundance, I began to worry. Timothy was also beginning to behave strangely. I observed him closely, to discover he had chewed his fingernails away. There were also a numerous amount of distinctive blood stains on the sleeves of his, white jacket. ...read more.

I was left stranded in the sand, and immediately took hold of the machete. I saw Timothy fall to the ground with his hands clamped to his eyes. Light hadn't been seen in days! With Timothy back on his feet again, we followed the sun's path across the island. We began to see life as we travelled across the island, first the occasional butterfly and then a flock of birds in full flight. Our spirits lifted as we saw the wildlife but then the sand became loose. The final dune was dreadful, as each footstep was engulfed by the dune. And then in the distance we heard it, a helicopter? Could it be? The noise became louder, as we progressed. We started climbing faster, hoping for the best and there it was, the icing on the cake, "UN Search & Rescue". As the fluorescent helicopter hovered above the shore-line, two men leapt out, wrapped us in warm blankets and escorted us to safety. ?? ?? ?? ?? ...read more.