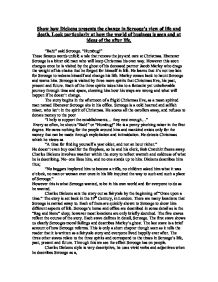 Show how Dickens presents the change in Scrooge's view of life and death. Look particularly at how the world of business

Show how Dickens presents the change in Scrooge's view of life and death. Look particularly at how the world of business is seen and at ideas of the after life. "Bah!" said Scrooge. "Humbug!" These famous words unfold a tale that renews the joy and care at Christmas. Ebenezer Scrooge is a bitter old man who will keep Christmas his own way. However this soon changes once he is visited by the ghost of his deceased partner Jacob Marley who drags the weight of his chains that he forged for himself in life. He learns that it's not too late for Scrooge to redeem himself and change his life. Marley comes back to haunt Scrooge and warns him. Scrooge is visited by three more spirits that Christmas Eve, his past, present and future. Each of the three spirits takes him to a fantastic yet unbelievable journey through time and space, showing him how his ways are wrong and what will happen if he doesn't change. The story begins in the afternoon of a frigid Christmas Eve, as a mean spirited man named Ebenezer Scrooge sits in his office. Scrooge is a cold hearted and selfish miser, who isn't in the spirit of Christmas. He scares all the carollers away, and refuses to donate money to the poor "I help to support the establishments... they cost enough..." Every so often, he shouts "Bah!" or "Humbug!" He is a penny pinching miser in the first degree. He cares nothing for the people around him and mankind exists only for the money that can be made through exploitation and intimidation. He detests Christmas which he views as "A time for finding yourself a year older, and not an hour richer." He doesn't even buy coal for the fireplace, so he and his clerk, Bob Cratchitt freeze away. Charles Dickens involves weather within the story to reflect warmth and coldness of what he is describing. ...read more.

We see Scrooge when he was a schoolboy at boarding school. On the first of two occasions of seeing him there he is sat alone in a cold schoolroom reading a book whilst everyone else is outside playing and having fun. "The school is not quite deserted...A solitary child, neglected by his friends, is left there still." When the ghost takes Scrooge where Scrooge was brought up he becomes merry and his cold eye glistens. As Scrooge sees himself neglected by his friends he "...sat down upon a form, and wept to see his poor forgotten self as he used to be." Scrooge looks about and feels upset about how he was as a small boy. "I wish, Scrooge muttered..." By Scrooge seeing his past it makes him feel different and he wishes that he gave the boy who came carol singing to his door the day before. The spirit becomes happy with this because he is beginning to change the way Scrooge feels. Now on the second occasion that the spirit visits the school is at Scrooges boarding school. We see a girl much younger than Scrooge who we get told is his sister has come to take him home. "Father is so much kinder than he used to be, that home's like heaven!" We learn that his father (who seems to once have been unkind) become much kinder and better than he used to be. The ghost notes that (unlike Scrooge so far) his sister, Fan had a large heart. Fred, Scrooges nephew is Fan's son, however she has now died. The quotation that Scrooge's father is kind now shows that people can change and change for the better. I believe that Scrooge partly went on to his father for the simple reason that he isn't a kind person. Once the ghost has shown Scrooge his childhood times he already makes a change in the way Scrooge feels. ...read more.

Scrooge becomes emotional to this and believes he can change for the better. "...I hope to live another man from what I was..." This I believe is a very strong image and what Marley has tried to do, has now shown to be a success. For Scrooge to mend his ways is vital for the good of everyone else. The spirit also shows Scrooge how the Cratchitts house is. He sees Bob and all his family apart from the one Scrooge was mostly worried about. Tiny Tim is Bob Cratchitt's youngest son who has been crippled from birth. Tiny Tim is a highly sentimentalized character who Dickens uses to highlight the tribulations of England's poor and to elicit sympathy from his middle and upper class relationship. Tiny Tim is a crippled young child and Dickens uses him as a character to broadcast a disability and what the family has to go through. With the help of Scrooge Tiny Tim can survive. It's effective at stimulating charitable giving that indigent people with disabilities could not simply ignore it if they wanted to survive outside the workhouse. When Scrooge wakes from his ghostly visitations, he delivers a huge turkey to the Cratchitt household and gives Bob a raise. He becomes a second father to Tiny Tim and reconciles with his own nephew. Overwhelmed with joy by the chance to redeem himself and grateful that he has been returned to Christmas day, Scrooge rushes out onto the street hoping to share his newfound Christmas spirit. He sends a giant Christmas turkey to the Cratchitt house and attends Fred's party, to the stifled surprise of the other guests. As the years go by, he holds true to his promise and honours Christmas with all his heart. He begins to treat Tiny Tim as if he were his own child. He provides lavish gifts for the poor, and treats his fellow humorous beings with kindness, generosity and warmth. With a Christmas carol, Dickens hopes to illustrate how self - serving, insensitive people can be converted into charitable, caring and socially conscious members of society. ...read more.