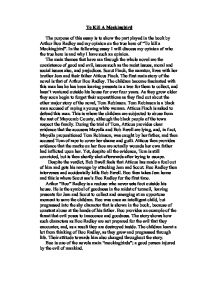 Show the part played in the book by Arthur Boo Radley and my opinion on the true hero of &quot;To kill a Mockingbird&quot;.

To Kill A Mockingbird The purpose of this essay is to show the part played in the book by Arthur Boo Radley and my opinion on the true hero of "To kill a Mockingbird". In the following essay I will discuss my opinion of who the true hero is and why I have such an opinion. The main themes that have ran through the whole novel are the coexistence of good and evil, issues such as the racist issues, moral and social issues also, and prejudices. Scout Finch, the narrator, lives with her brother Jem and their father Atticus Finch. The first main story of the novel is that of Arthur Boo Radley. The children become fascinated with this man has he has been leaving presents in a tree for them to collect, and hasn't ventured outside his house for over four years. As they grow older they soon begin to forget their superstitions as they find out about the other major story of the novel, Tom Robinson. Tom Robinson is a black man accused of raping a young white woman. ...read more.

Boo was once an intelligent child, but progressed into the shy character that is shown in the book, because of constant abuse at the hands of his father. Boo provides an example of the threat that evil poses to innocence and goodness. The story shows how such characters as Boo Radley are not prepared for the evil that they encounter, and, as a result they are destroyed inside. The children learnt a lot from thinking of Boo Radley, as they grew and progressed through life. Their attitude towards him also changed throughout the story. Boo is one of the novels main "mockingbirds"; a good person injured by the evil of mankind. Atticus Finch is one of the major characters within the book. He is a lawyer who possesses important qualities such as wisdom and intelligence and because of these qualities he is respected by everyone within Maycomb County, especially the Black community. He functions as the moral backbone of Maycomb, and as a person the people of the town look up to and aspire to. These qualities soon turn him into a figure of hate, as he agrees to defend Tom Robinson. ...read more.

He passes this moral lesson onto Scout. Atticus says many wise things within the novel. One of the most important quotes is "You never really understand a person until you consider things from their point of view....until you climb into his skin and walk around in it". This quotation was said to Scout in an attempt to make her develop an understanding towards other peoples feelings, and at the end of the book she understands Boo Radleys perspective. Another important quote within the book is "remember it's a sin to kill a mockingbird". This quote provides the source of the title and one of the key metaphors within the book. Atticus Finch has ethical values and has many moral stances. He practices accountability meaning he truly understands his influence upon issues and situations that surround him. As a lawyer, a father and also a member of society, Atticus has an obligation to uphold to society and I believe he does so in a heroic way. In conclusion, I feel that both characters have pivotal roles within the novel. However, in my opinion, I believe Atticus Finch to be the true hero as he provides the novel with various issues that make him a respectable heroic man, and the real hero of "To kill a Mockingbird". ...read more.