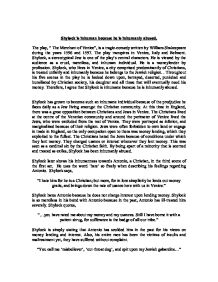 Shylock is inhuman because he is inhumanly abused.

Shylock is inhuman because he is inhumanly abused. The play, " The Merchant of Venice", is a tragic-comedy written by William Shakespeare during the years 1596 and 1597. The play transpires in Venice, Italy and Belmont. Shylock, a stereotypical Jew is one of the play's central characters. He is viewed by the audience as a cruel, merciless, and inhuman individual. He is a moneylender by profession. Shylock, who lives in Venice, a city comprised predominantly of Christians, is treated unfairly and inhumanly because he belongs to the Jewish religion. . Throughout his five scenes in the play he is looked down upon, betrayed, deserted, punished and humiliated by Christian society, his daughter and all those that will eventually need his money. Therefore, I agree that Shylock is inhumane because he is inhumanly abused. Shylock has grown to become such an inhumane individual because of the predjudice he faces daily as a Jew living amongst the Christian community. At this time in England, there was a great opposition between Christians and Jews in Venice. The Christians lived at the centre of the Venetian community and around the perimeter of Venice lived the Jews, who were excluded from the rest of Venice. They were portrayed as inferior, and marginalized because of their religion. Jews were often forbidden to own land or engage in trade in England, so the only occupation open to them was money lending, which they exploited to the fullest. ...read more.

Shylock again shows his inhumanness Act 2 Scene 3. His bitter, gloomy, and life-denying spirit forces his own daughter, Jessica, to turn away from him and run away. Shylock's first line in the play is: "Three thousand ducats!" This can be seen in two ways: as a man making a living at one of the very few occupations open to him, or a greedy cold materialistic man. It fits the cold, greedy, inhuman character more. This is because he makes such a big point about locking up the house before leaving to attend Bassanio's home. He stresses the point repeatedly, for he has had a vision of theft. This shows Shylock's inhumanness, as his primary concern is to keep his possessions protected. He does not tell his daughter to be safe, but focuses solely on the safety of his assets. Shylock is portrayed as an ill-attentive, restrictive father. This however, is a result of the inhuman abuse that Shylock receives outside his household's walls. He is so afraid of the outside world and mistreated so much that he feels it is necessary to for him to take such precautions when handling his assets, and in doing so, overlooks the safety of his daughter. Shylock is left alone with no family, as Jessica, his daughter, elopes with Lorenzo, a friend of Bassanio. ...read more.

After this occurs, the inhumanly abuse begins again. The Venetian law states that a penalty must be paid by an alien attempting to murder a Venetian. Still Shylock is classified as an alien in his home. His possessions are confiscated because of the attempted murder of Antonio. Antonio now makes two conditions for his life. Firstly, Shylock must become Christian, and, secondly, he must make a will leaving all of his possessions to Jessica and Lorenzo. Not only has Shylock been converted to a Christian and humiliated in court, but also his friend Tubal, another Jew, walks out on him as he is about to carve a pound of flesh from Antonio. His only friend has left him. He is betrayed by yet another person. So without his revenge, wealth, and his daughter, now he is alienated from his fellow Jews. Shylock in inhuman because he is inhumanly abused. He is a member of the scorned, minority, Jewish race. Antonio, to whom Shylock still lends his money, has publicly ridiculed Shylock. His daughter and his best friend have also betrayed him. He is forced to give up his religion and is therefore humiliated by the Christian society. Shylock is inhumanly abused because he is has had everything taken away from him, and has become an outcast. If Shylock were treated like a human being, his humanity might have been present in the play, "The Merchant of Venice". Word Count: 1,397 ...read more.