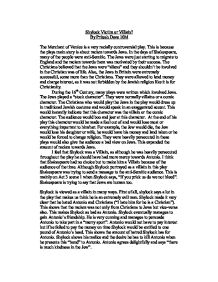 Shylock Victim or Villain? By Pritesh Dave 10M The Merchant of Venice is a very racially controversial play. This is because the plays main story is about racism towards Jews. In the days of Shakespeare, many of the people were anti-Semitic. The Jews were just starting to migrate to England and the racism towards them was motivated by their success. The Christians believed that the Jews were "aliens" and they shouldn't be involved in the Christian was of life. Also, the Jews in Britain were extremely successful, some more than the Christians. They were allowed to lend money and charge interest, as it was not forbidden by the Jewish religion like it is for Christianity. During the 16th Century, many plays were written which involved Jews. The Jews played a "stock character". They were normally villains or a comic character. The Christians who would play the Jews in the play would dress up in traditional Jewish costume and would speak in an exaggerated accent. This would instantly indicate that this character was the villain or the comic character. The audience would boo and jeer at this character. At the end of his play this character would be made a fool out of and would lose most or everything important to him/her. ...read more.

He finds out that Jessica is selling his ring that was given to him by his wife. Shylock does not seem very concerned for the safety of his daughter. When Shylock is questioned about why he wants a pound of Antonio's flesh he replied, " to bate fish withal" and for revenge. This shows the brutality of Shylock. Shylocks mood is changed when he is told of bad news on Antonio' s behalf. He finds out that Antonio's boats had all sunk. This made shylock extremely happy and bloodthirsty. Shylock asks Tubal to get an officer to arrest Antonio immediately. In the final court scene, shylocks ruthlessness and brutality is exposed. He comes into the court with a balancing scale and a knife ready to cut the pound of flesh. While the court question whether Shylock will have his bond, Shylock maliciously sharpens his knife on the sole of his shoe. Bassanio had offered Shylock three times the money, but Shylock would have nothing and kept repeating, "I will have my bond". This shows that shylock is bloodthirsty and wants to kill Antonio for only one reason. Revenge. Although Shakespeare was forced to make Shylock villainous he tries to send many messages across to the audience. ...read more.

Shylock is a very religious Jew and to change his beliefs like that was uncalled for. I feel that in the court scene, Shylock was robbed and didn't need to be forced to change his religion. Shylock suffered the most racist abuse in the last scene. In conclusion I feel that if Shakespeare wasn't living in anti-Semitic times his choice to make Shylock the "bad guy" would be extremely different. You can tell that Shakespeare is not anti-Semitic because if he was he wouldn't have put in the "if you prick us do we not bleed" speech. As he did live in an anti-Semitic world, he did very well in making Shylock a Villain. Shylock is an evil character and is also racist but toward Christians. This makes him as bad as the Christians who persecuted him. I think that Antonio is the bad character as he inflicted the most racism. Shylock is a villainous character as he had the idea of killing Antonio and cleverly binding it into the bond. My First idea of Shylock was an evil villainous man but know I think that he is persecuted a lot and the racism towards him in this play is very strong. I feel know, that Shylock is equally a victim than he is a villain. ...read more.

The candidates introduction contains some interesting factual information clearly gained from independent research, this is interesting to read and shows the candidates interest in the play. However the candidates introductory paragraph is lacking several important factors. An introduction should state any questions you intend to answer, in this case is Shylock a villain or a victim? It should also include a brief summary of any topics you plan to discuss and this case it would be appropriate to give an outline of ShylockÃ¢â‚¬â„¢s character.

In general the candidates analysis is of a reasonable standard, but there are times in which they use quotations to retell sections of the play, this needs to be avoided. You should discuss what the characters are thinking or feeling and use quotations in a way that they support your ideas and opinions. Additionally the candidate provides a great deal of background information concerning the way in which Jewish people were treated at the time this play was written, this additional information adds depth to the essay and is interesting to read. Finally the candidate concludes this essay with a personal response to Shylock as character, which is something you should try to include. However you also need to summarise your key ideas and make sure that your clearly answer the set question. You want to try and leave the reader with a good impression.

The candidates writing is coherent and easy to read, plus they have used a good range vocabulary. In addition there are few if any spelling or grammatical errors. Though they have failed to mention any of linguistic techniques used within the play, such as metaphors and similes, this is something that needs to be discussed in order to achieve a higher grade at this level of qualification.