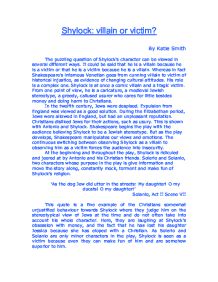 Shylock: villain or victim? By Katie Smith The puzzling question of Shylock's character can be viewed in several different ways. It could be said that he is a villain because he is a victim or that he is a victim because he is a villain. Whereas in fact Shakespeare's infamous Venetian goes from cunning villain to victim of historical injustice, as evidence of changing cultural attitudes. His role is a complex one. Shylock is at once a comic villain and a tragic victim. From one point of view, he is a caricature, a medieval Jewish stereotype, a greedy, callused usurer who cares for little besides money and doing harm to Christians. In the twelfth century, Jews were despised. Expulsion from England was viewed as a good solution. During the Elizabethan period, Jews were allowed in England, but had an unpleasant reputation. Christians disliked Jews for their actions, such as usury. This is shown with Antonio and Shylock. Shakespeare begins the play with the audience believing Shylock to be a Jewish stereotype. But as the play develops, Shakespeare manipulates our views and emotions. ...read more.

As the enemy, they are biased and have a tendency to pick out the bad parts of his nature. He is referred to as 'The Dog' and has references to the devil. He is taunted also about his business. He, unlike Christian moneylenders, charges interest for his services. Antonio publicly humiliates Shylock and criticises him about the way he lends money. In Act I Scene III, Shylock says to Antonio: 'In the Rialto you have rated me About my moneys and usances" Yet all the time he responds with nothing, this could mean that either he is too good natured and so does not stand up for himself suggesting he is a victim; but the more likely situation is that he is biding his time to get revenge on the Christians. This is when the bond is set up between Antonio and Shylock. Antonio is somewhat taken aback by the terms of the bond. In this scene Shylock is quite wise and cunning. ...read more.

The ring was very precious to Shylock, and he is very angry with Jessica for selling it for a monkey. This portrays him as a victim because even his own daughter cannot stand to be around him, and hates him. Jessica says she is ashamed to be her father's daughter, and describes her house as hell: 'Alack, what heinous sin is it in me to be ashamed to be my father's child!' During the play, Shylock becomes more and more isolated. Firstly, his servant Launcelot leaves his service to work with Bassanio, and then his daughter leaves him to elope with Lorenzo. Both Bassanio and Lorenzo are Christians, which again suggests that he is a victim of racism. In the courtroom, Shylock loses everything: his money, his house, his religion, and he is forced to leave his money to Jessica and Lorenzo. He is forced to convert to Christianity, and I think this was the worst punishment for Shylock because his religion is very important to him, and he already hates Christians. Forcing Shylock to convert to Christianity is practically racism because it is like saying that Christianity is the 'right' religion and you are not supposed to be Jewish. ...read more.