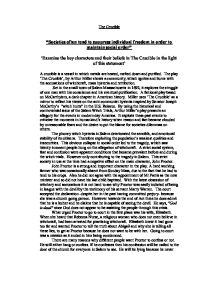 &quot;Societies often tend to suppress individual freedom in order to maintain social order&quot; 'Examine the key characters and their beliefs in The Crucible in the light of this statement'

The Crucible "Societies often tend to suppress individual freedom in order to maintain social order" 'Examine the key characters and their beliefs in The Crucible in the light of this statement' A crucible is a vessel in which metals are heated, melted down and purified. The play 'The Crucible', by Arthur Miller shows a community, which ignites and burns with the accusations of witchcraft, mass hysteria and retribution. Set in the small town of Salem Massachusetts in 1692, it explores the struggle of one man with his conscience and his eventual purification. A fictional play based on McCarthyism, a dark chapter in American history. Miller uses 'The Crucible' as a mirror to reflect his views on the anti-communist hysteria inspired by Senator Joseph McCarthy's "witch hunts" in the U.S. Reissue. By using the historical and controversial issue of the Salem Witch Trials, Arthur Miller's play presents an allegory for the events in modern-day America. It exploits these past events to criticize the moments in humankind's history when reason and fact became clouded by unreasonable fears and the desire to put the blame for societies dilemmas on others. ...read more.

Hale would be very happy if Proctor confessed because he would, and does, blame himself for Proctor's hanging "I would save your husbands life, for if he is taken I count myself his murderer" he tells Elizabeth. He came to the town believing that he knew all about witchcraft, what he did not realise was that it can destroy lives whether it is fact or fiction. By the end of the play he realises that all he has been saying is untrue and the law uses it as evidence "It is mistaken law that leads you to sacrifice". Hale feels guilty and responsible for Proctor's sentence to death. which is why he asks the court to postpone the hangings "Excellency, if you postpone a week . . ." so he will have time to prove to the court that they should not be hung and try to put right what he has done wrong, but it is too late. The only chance he has of saving Proctor's life is to encourage him to confess, so he turns to Elizabeth" let you not be mistaken your duty as I mistook my own. ...read more.

Abigail abandons Tituba, and accuses her of "sending her spirit on me in church; she makes me laugh at prayer", and Abigail also says Tituba "comes to me every night to go and drink blood". Abigail reacts like this only to save her from being suspected of witchery. At the end of Scene One, many community members are accused of consorting with the devil. These names were given by all of the girls present that took part in the ritual in the woods, in an attempt to return to God and to be declared bewitched. This was a common reaction that many had when accused of witchery. The clear destruction of Salem's social order was due to fear of the unknown, and mass confusion. The inclination that Salem fell victim to, was the cause of a great tragedy, which saw twenty townspeople hung at the hands of the state. The Crucible written by Arthur Miller is a story of a great catastrophe which highlights a "free man's courageous and never-ending fight against mass pressures to make him bow down in conformity"(intro. -x) and shows how hysteria can be used for evil purposes in an atmosphere were there is a belief in freedom and right of disagreement. ...read more.