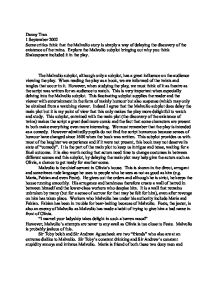 Some critics think that the Malvolio story is simply a way of delaying the discovery of the existence of the twins. Explore the Malvolio subplot bringing out why you think Shakespeare included it in the play.

Danny Tran 1 September 2002 Some critics think that the Malvolio story is simply a way of delaying the discovery of the existence of the twins. Explore the Malvolio subplot bringing out why you think Shakespeare included it in the play. The Malvolio subplot, although only a subplot, has a great influence on the audience viewing the play. When reading the play as a book, we are informed of the twists and tangles that occur in it. However, when studying the play, we must think of it as theatre as the script was written for an audience to watch. This is very important when especially delving into the Malvolio subplot. This fascinating subplot supplies the reader and the viewer with entertainment in the form of mainly humour but also suspense (which may only be obtained from a watching viewer. Indeed I agree that the Malvolio subplot does delay the main plot but it is my point of view that this only makes the play more delightful to watch and study. This subplot, entwined with the main plot (the discovery of the existence of twins) makes the script a great deal more comic and the fact that some characters are present in both make everything even more interesting. We must remember that the play is intended as a comedy. ...read more.

Malvolio thinks very high of himself and is truly a very vain man. He is in love with himself and thinks that he is perfect. In the play he says, "Some are born with greatness Some achieve greatness and, Some have greatness thrust upon them" This is the height of his vanity and Olivia herself acknowledges his self-love. Nevertheless, Olivia also claims that he does have some good points. She gets Malvolio to give Cesario the ring back and to greet Cesario (Viola) every time "he" comes to her home. He is responsible and will do anything to please her. Olivia probably already knows that Malvolio feels attracted to her. His failure before to court her is probably a reason why he loathes and degrades everybody else. Maria also speaks of Malvolio's vanity, "...the best persuaded of himself, so crammed, as he thinks, with excellencies, that it is his grounds of faith that all that look upon him will love him; and on that vice in him will my revenge find notable cause to work." Maria plans to write a love letter and plant it where Malvolio will find it. She plans not to say from whom it is from. She can write similarly to Olivia and Malvolio is to mistake this letter to be from Olivia herself. ...read more.

One of the themes in this play is things not being as they seem and situations being turned upside down. Here Malvolio is turned from a respectable man who is chief-servant to a "madman" locked up in a cell. Feste, as Sir Topas makes fun of Malvolio and the head-servant is made to beg. Without this sub-plot, the play would be a lot less worth watching and the main plot of the twins would have to be made a lot more complex and long. The only other part of the play which may make the play comical is where Sir Andrew and Sir Toby mistakes Sebastian for Viola and fight the wrong person. The Malvolio subplot also helps to change the mood from anxiousness to humour. The Malvolio plot gives the audience mainly laughter whilst the main plot keeps us intrigued. They are in contrast in terms of how they make us feel. However, it can be said that they complement each other because opposites attract. Moreover, it you get bored with one plot-strand, there is the other to watch so Shakespeare is targeting a wider audience. In conclusion, yes the Malvolio plot does delay the main plot but it is for the better and helps with the acting in that it gives some actors a chance to get ready for their next scene. It provides humour and suspense to make the play an actual comedy rather than a romantic story that simply ends happily. ...read more.