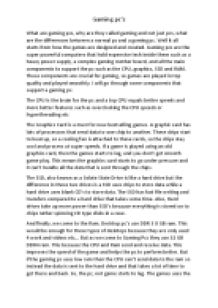 Transfer-Encoding: chunked ﻿Gaming pc?s What are gaming pcs, why are they called gaming and not just pcs, what are the differences between a normal pc and a gaming pc. Well it all starts from how the games are designed and created. Gaming pcs are the super powerful computers that hold expensive tech inside them such as a heavy power supply, a complex gaming mother board, and all the main components to support the pc such as the CPU, graphics, SSD and RAM. These components are crucial for gaming, so games are played in top quality and played smoothly. I will go through some components that support a gaming pc. The CPU is the brain for the pc and a top CPU equals better speeds and more better features such as overclocking the CPU speeds or hyperthreading etc The Graphics Card is a must for new bestselling games. ...read more.

The SSD has fast file writing and transfers compared to a hard drive that takes some time. Also, Hard drives take up more power than SSD?s because everything is stored on to chips rather spinning CD type disks in a case. And finally, we come to the Ram. Desktop pc?s use DDR 3 8 GB ram. This would be enough for these types of desktops because they are only used 4 work and videos etc... But as we come to Gaming Pcs they use 32 GB DDR4 ram. This because the CPU and Ram send and receive data. This improves the speed of the game and helps the pc to perform better. But if the gaming pc uses low ram then the CPU can?t send data to the ram so instead the data is sent to the hard drive and that takes a lot of time to get there and back. ...read more.

But as time moved on companies like AMD or Intel started to create CPU?s with better features like 2D or 3D game support or better performance in pcs. Then came in graphic card that were created by Nvidia which could support new games with higher details and data. These games had requirements, so a game played that matched the requirements of the games was sure to be played smoothly and performed better. But if the games were to be played and the requirements didn?t match then that would cause in the games lagging or not even starting up. So, to conclude Gaming Pcs are very powerful as it comes to new top games cause our desktop pcs won?t be able to handles these type of graphics or requirements of the game. Thank you for listening to my speech! ...read more.