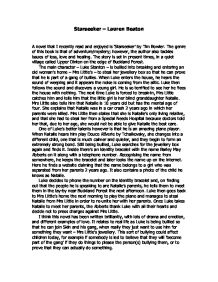 Starseeker - Lauren Beaton A novel that I recently read and enjoyed is 'Starseeker' by Tim Bowler. The genre of this book is that of adventure/mystery; however, the author also tackles issues of loss, love and healing. The story is set in present times, in a quiet village called Upper Dinton on the edge of Buckland Forest. The main character - Luke Stanton - is bullied into breaking and entering an old woman's home - Mrs Little's - to steal her jewellery box so that he can prove that he is part of a gang of bullies. When Luke enters the house, he hears the sound of weeping and it appears the noise is coming from the attic. Luke then follows the sound and discovers a young girl. He is so terrified to see her he flees the house with nothing. The next time Luke is forced to break-in, Mrs Little catches him and tells him that the little girl is her blind granddaughter Natalie. Mrs Little also tells him that Natalie is 10 years old but has the mental age of four. She explains that Natalie was in a car crash 2 years ago in which her parents were killed. Mrs Little then states that she is Natalie's only living relative, and that she had to steal her from a Special Needs Hospital because doctors told her that, due to her age, she would not be able to give Natalie the best care. ...read more.

They all started drinking and smoking, and were trying to get Luke to have some even though he hated both. "Speed took a couple of swigs and passed the bottle to Luke. Luke only took one small swig, though he tried to make it look like more. He had no taste for whisky. They'd made him drink some the last time they met in the tree house and he'd felt so queasy and light-headed that he'd nearly slipped when he was climbing down". Again, this type of peer pressure is something that many teenagers may face today on a regular basis, in order to be 'accepted'. I also think the plot is fantastic as it tells so many stories at the same time. It describes Luke's 'friendship' with Skin, Daz and Speed. It also considers Luke's relationship with his Dad (who died of cancer about two years ago) and how he often senses his Dad around him. Later it reveals that Mrs Little was lying about Natalie, and also that Luke hates his Mum's new boyfriend - Roger Gilmore - because he feels his Mum cannot love two men at the same time (his Dad and Roger). Luke hates Roger because he believes he is trying to replace his Dad. He thinks the situation is harder for him than any other teenager who has lost one of their parents when the living parent finds love again, especially as Roger (or Mr Gilmore!) ...read more.

The book is extremely engrossing and deals with many issues relevant to everyday life. The ending was expected because the book had such a good beginning and middle. It almost gave you the impression that it HAD to turn out well. Barley was thankfully re-united with her parents. Roger saved Luke when the bullies had beaten him up and chased him to the top of the tree house. Although they set the bottom of the tree on fire and left him to die, Roger found him and saved his life so Luke forgave him and let him and his Mum get married. Mrs Little accepted what she did was wrong and became more involved with the outside world. Luke and Miranda started going out with each other and became boyfriend and girlfriend. The ending was definitely the best ending the author could ever give this story. I felt so happy the minute I closed the book after finishing it, it was almost as though the whole shebang had actually been real! I loved this novel mainly because it felt so real when I was reading it, things kept happening all the time so it kept you reading more and more. It definitely lives up to it's comments at the back of the book, "It is extremely powerful and mysterious. It's very strange to find a book that moves the heart, touches the spirit and yet remains so well grounded in everyday life" I definitely recommend this book to teenagers or adults and I am looking forward to reading more books by this author. ...read more.