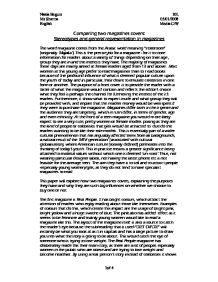 Stereotypes and general representation in magazines

Comparing two magazines covers: Stereotypes and general representation in magazines The word magazine comes from the Arabic word meaning "storeroom" (originally 'Majalla'). This is the precise job for a magazine- for it to store information for readers about a variety of things depending on their age, group they are in and the interests they have. The majority of magazines these days are mainly aimed at female readers aged from 13 and above. Most women at this young age prefer to read magazines than to read books because of the profound influence of what is deemed popular culture upon the youth of today and in particular, their desire to emulate celebrities in one form or another. The purpose of a front cover is to provide the reader with a taster of what the magazine would contain and reflects the editor's choice what they feel is perhaps the channel for furthering the interest of the it's readers. Furthermore, it show what to expect inside and what gossip they will be provided with, and implies that the readers money would be well spent if they were to purchase the magazine. ...read more.

In contrast to 'Real People', "New" has much more influence about the way that a person should dress and what are the desired ways to be a real woman is. The slogan that is used at the front of "New" magazine -if its hot its here! - Attracts the eye of the reader because they know that what they are reading about these celebrities is going to be new information about them. At the front of the cover there is only a small space that is given to a real life story and lots of colour, 3 pictures of female celebrities and big text take up the rest of the space on the cover. "New" has a bright and full cover. Although there doesn't seem to be much on the cover the fact that there is someone who is well known on the cover- in this case Victoria Beckham. Readers would like to become like her and what they see. Although on the cover the heading that is used is "Posh's baby news" the public are able to see that it will only be part of the story and the picture shows how skinny she is and what kind of clothes she wears. ...read more.

On the other hand people who are mostly over the age 30 or so would read "Real People". The reasons behind these conclusions are that those over 30 would like to still remain fashionable but would be more interested with wants going around with those more closer to home who they would have much more in common with. I wouldn't choose to read either of the magazines because on the cover there isn't anything, which interest me, although the strap lines to both of the magazines are quite persuasive and are influencing me to buy them. As I am teenager, if I was trying to stay into trends and wanted to seem more sexually knowledgeable, I would choose to read the "New" magazine as it seems to be able to fulfil those desires that I have and this is done easily by just featuring very wealthy, slim, famous female celebrities on the front. I would also feel more secure about myself because "New" the cover of it makes me feel as though it's a feminine magazine so I would know more about the way I should be acting and what I should spend my money on amongst my peers. ?? ?? ?? ?? Nazia Begum 10L Ms Sharma 05/01/2008 English Media C/W 1of 4 ...read more.