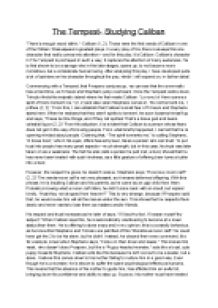 Studying the character of Caliban in The Tempest

Transfer-Encoding: chunked ﻿The Tempest- Studying Caliban ?There?s enough wood within,?- Caliban (1, 2). Those were the first words of Caliban in one of the William Shakespeare?s greatest plays. In every play of his, there is always this one character that really comes into attention ? and for this play, it?s Caliban. Caliban?s character in The Tempest is portrayed in such a way; it captures the attention of many audiences. He is first shown to be a savage who in the later stages, opens up, to not become more monstrous, but a considerate human being. After analysing this play, I have developed quite a lot of opinions on his character throughout the pay, which I will expand on, in further detail. Commencing with a Tempest, that Prospero conjures up, we can see that the crew really has a hard time, as Trinculo and Stephano jump overboard. Once the Tempest calms down, Trinculo finds this majestic island where he first meets Caliban. ?Lo now, lo! Here comes a spirit of his to torment me,? (2, 2) and also when Stephano comes in, ?Do not torment me, I prithee (2, 2).? From this, I can establish that Caliban?s small fear of Trinculo and Stephano starts here. When he realises that they aren?t spirits to torment, he soon loosens himself up and says, ?These be fine things, and if they not sprites! ...read more.

Here, he came to a realisation that trusting Prospero was a bad idea as he had it all thrown back in his face. All this being felt, he expressed by throwing back what Prospero gave in his face. The teaching of good language, he turned to a curse, later on cursing him with his own mother. Analysing those 2 lines, we can see that Caliban is a troubled person who just wants what a human wants. His main wish is respect. All he wants is to be treated with respect just like before. The trouble is Caliban doesn?t understand why all the trust in him was lost. This is one part of him that makes people think, he isn?t human, even though other parts of his personality is. Using ?Sycorax? in the curse, makes me think about his desperateness for a human body and a normal mother. Deep inside, Caliban must blame his deformed body on his mother, who is so foul; she is used in a curse. When it comes to the ruling system and their stories to the crown, Caliban and Prospero have a similarity. ?Which first was mine own king,? He is here simply saying that he himself was the king of the island until Prospero came along. This is similar to Prospero?s story, as he was a usurped king. I think Caliban can empathise with Prospero, but the opposite can?t be done The reason this can?t happen is because Prospero loathes Caliban. ...read more.

Seek for grace shows he is looking for forgiveness and does respect Prospero, even though he shows a lot of hate. In the Tempest, Caliban was mainly portrayed as a monster, but in my opinion, he isn?t one. Many people have different opinions of him because if he were to e human, he wouldn?t be judges the same. As time passed, his position in society changed, due to many historic events. When America was found, places were colonised, changing people?s civil rights. If these rights were to have been there at the time the play was written, William wouldn?t have made him look to be this monster, especially after Prospero took the isle off him. Discrimination, and him being a ?moon calf? made people think less of him. This low standard that characters in the play had set for him, forces Caliban to be the savage people said he was; leading him to attempt to rape Miranda and attempt to kill Prospero. I can?t blame him because I would say he was nurtured in a bad way by his cruel mother Sycorax. As she was a witch, her lifestyle and personality traits, must have influenced Caliban to be the same. He wouldn?t have had an escape from her, because he didn?t have a father he could rely on. After analysing this, I would say that Caliban is a normal human; I don?t have the right to judge, because everyone has different circumstances, whether it is a broken family, or society being harsh on a person. ...read more.