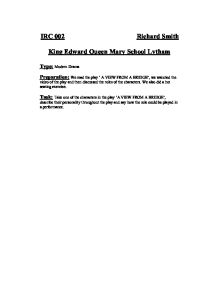 Take one of the characters in the play &amp;#145;A VIEW FROM A BRIDGE&amp;#146;, describe their personality throughout the play and say how the role could be played in a performance.

IRC 002 Richard Smith King Edward Queen Mary School Lytham Type: Modern Drama Preparation: We read the play ' A VIEW FROM A BRIDGE', we watched the video of the play and then discussed the roles of the characters. We also did a hot seating exercise. Task: Take one of the characters in the play 'A VIEW FROM A BRIDGE', describe their personality throughout the play and say how the role could be played in a performance. Introduction I am writing about a character from the play a view from a bridge. The character's name is Eddie Carbone. Eddie is an Italian/American who lives in a place called Red Hook. Red Hook is the 'gullet of New York'. Eddie is a longshoreman that works on the docks from Brooklyn Bridge to the breakwater where the sea begins. Eddie is 'forty', 'husky', and 'slightly overweight'. Eddie In The Play (ACT 1) At the start of the play Eddie is coming in from his day of work and he goes to his chair after hanging his cap and jacket. Catherine (his niece) rushes to say hello. The way that he hangs up his cap and jacket, 'Eddie is pleased and therefore shy about it'; Eddie's first actions in the play towards Catherine quite clearly shows that he is fond of her. Eddie does not say hello to anyone, just asks 'where you going all dressed up?' He runs his hands over her skirt. This is not what a normal uncle or parent would do. This shows that Eddie has deep feelings towards Catherine and he comes across being very intimate with Catherine. Eddie complements Catherine on how she looks. He likes her appearance, he finds her attractive. However Eddie criticises the skirt because he thinks that it is too short. He finds a reason for why he is correct. This happens often in the play. ...read more.

Eddies doesn't like to see his Catherine go out with a person who people make fun of and laugh about. As his friends leave Catherine and Rodolpho return from the Paramount. He is upset to see them together and he asks Rodolpho to go inside. Rodolpho refuses and answers back to Eddie. Eddie gets angry and asks him again. Rodolpho walks off down the street. Eddie asks Catherine what will happen with her and Rodolpho. Eddie is upset. When she asks him 'what're you got against him?' he becomes tense. He finds negative comments to make about Rodolpho. Catherine thinks that Rodolpho has respect for Eddie but he tries to convince her that it is not so. Eddie tries his hardest to convince Catherine that Rodolpho is not the right man for her. Eddie will do this all his life because he thinks that the only right man for Catherine is himself. Catherine becomes angry at the accusations that Eddie is making. Catherine answers him back. Yet again Eddie finds another excuse. Eddie upsets Catherine and yet again brings her to tears. She runs inside crying, but Eddie has not got his own way this time, he follows her inside. Beatrice explains why Eddie is acting in this manor but does not tell her the full storey. She doesn't tell her about Eddies love for Catherine. Eddie talks with his lawyer. He tries to find out a way in which he can get rid of Rodolpho and also how he can get Catherine back. Eddie tries to make every excuse on why Rodolpho should not be with Catherine; unfortunately everything is in line with the law. Eddie accuses Rodolpho of being gay. Eddie is trying to use every excuse that he can find to give him a reason to split Catherine and Rodolpho up. The conversation is ready to close until Alfieri says this, 'You know sometimes, God mixes up the people. ...read more.

Eddie is becoming weaker each time she insults him. Beatrice stops her from saying bad thing about him. Beatrice knows how much damage it is doing to Eddie. Beatrice stays with Eddie at the house while Catherine goes to her wedding. Rodolpho comes in to the room. Eddie tells him to get out. Rodolpho tries to reason with him but Eddie refuses to co-operate. Rodolpho says ' Marco is coming, Eddie. He is praying in the church, you understand?' Marco is on his way to get Eddie. Eddie knows yet refuses to leave the house. Eddie tries to look as though he is calm, on the inside Eddie is scared and knows what will happen when Marco arrives. Eddie sits in his chair and acts like a rock. He refuses to move and he will not listen to what anyone has to say, because in his mind he knows what he wants. Eddie explains what he wants; he wants his name. As Eddie exits for the door, Marco shouts from outside. 'Eddie Carbone!' Eddie stands frozen, Eddie did not expect it to be like this. Eddie thought that no one would ever challenge him because he always acts as a powerful figure around everyone. Eddie torments Marco without showing one bit of fear. Eddie has anger built up inside him but he controls it in a powerful manor. Eddie calls Marco a liar. Marco is becoming more and more angry. They lunge for each other and Marco pins Eddie to the floor. Eddie brings out a knife. Eddie has a knife because he knew that his chances were very little against such a man as Marco. Marco is a bigger and stronger man than Eddie. Marco turns the blade on Eddie. As he dies Catherine says ' Eddie, I never meant to do nothing bad to you. He replies ' Then why - Oh B!' Catherine doesn't know what hurt and pain she has caused him, this is why he gives her that answer. Catherine is upset but not half as upset as she would be if she knew the truth about Eddie. ...read more.