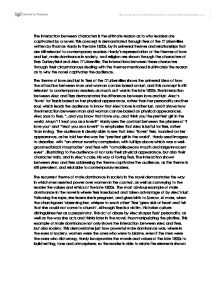 Tess of the D'Urbervilles: The Ultimate reason as to why readers are captivated by a novel is the interaction between characters

The interaction between characters is the ultimate reason as to why readers are captivated by a novel. This concept is demonstrated through Tess of the D'Urbervilles written by Thomas Hardy in the late 1800s, by its universal themes and relationships that are still relevant to contemporary readers. Hardy's representation of the themes of love and lust, male dominance in society, and religion are shown through the characters of Tess Durbeyfield and Alec D'Urberville. The interactions between these characters through their circumstances dealing with the themes mentioned is ultimately the reason as to why the novel captivates the audience. The theme of love and lust in Tess of the D'Urbervilles shows the universal idea of how the attraction between man and woman can be based on lust, and this concept is still relevant to contemporary readers, as much as it was in the late 1800s. The interaction between Alec and Tess demonstrates the difference between love and lust. Alec's "love" for Tess is based on her physical appearance, rather than her personality and her soul, which leads the audience to know that Alec's love is rather lust, and it shows how the interaction between man and woman can be based on physical appearances. ...read more.

The most obvious example of male dominance in the novel is where Tess is seduced and taken advantage of by Alec's lust. Following the rape, she learns she is pregnant, and gives birth to Sorrow. At mass, when the churchgoers "observing her, whisper to each other" Tess "grew sick at heart and felt that she could not come to church". Although Tess is a victim, Victorian culture distinguishes her as a perpetrator. This act of abuse by Alec shapes Tess' personality, as well as the way she acts and thinks later in the novel, thus manipulating the plotline. This example of male dominance not only shows the interaction between Alec and Tess, but also society. This demonstrates just how powerful male dominance was, where in the eyes of society, women were the ones who were to blame, even if the men were the ones who did wrong. Hardy incorporates the morals and values of the late 1800s to build setting, tone and atmosphere, so the reader is able to relate the elements shown in the novel to their context. ...read more.

Alec remains little changed from his previous incarnation remains his assured belief that it is Tess who is responsible for Alec's sins and not Alec himself. Hardy conveys his critical views on religion in the 1800s, captivating readers with his perspectives that are illustrated though the the characters and the recurrent theme of religion. The interaction between characters in a novel is the ultimate reason as to why the audience is captivated. Through Tess of the D'Urbervilles, Thomas Hardy demonstrates the importance of contact between characters in carrying out the plotline and determining character traits as well as tone, atmosphere and context. Alec D'Urberville and Tess Durbeyfield illustrate to the reader the concept of character interaction and its importance and contribution to the novel. His universal themes of love and lust, male dominance in society, and religion are prevalent and easily relatable to contemporary audiences as well as audiences of any context as those themes underlie most societies. The characters of Tess and Alec convey these universal themes and hence, the reader is captivated by how they interact with each other as well as society. ?? ?? ?? ?? ...read more.