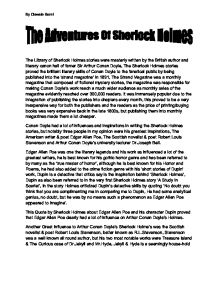 The Adventures of Sherlock Holmes

The Library of Sherlock Holmes stories were masterly written by the British author and literary canon hall of famer Sir Arthur Conan Doyle, The Sherlock Holmes stories proved the brilliant literary skills of Conan Doyle to the fanatical public by being published into the 'strand magazine' in 1891, The Strand Magazine was a monthly magazine that composed of fictional mystery stories, the magazine was responsible for making Conan Doyle's work reach a much wider audience as monthly sales of the magazine evidently reached over 300,000 readers. It was immensely popular due to the integration of publishing the stories into chapters every month, this proved to be a very inexpensive way for both the publishers and the readers as the price of printing/buying books was very expensive back in the late 1800s, but publishing them into monthly magazines made them a lot cheaper. Conan Doyle had a lot of influences and inspirations in writing the Sherlock Holmes stories, but notably three people in my opinion were his greatest inspirations, The American writer & poet Edgar Allen Poe, The Scottish novelist & poet Robert Louis Stevenson and Arthur Conan Doyle's university lecturer Dr.Joseph Bell. Edgar Allen Poe was one the literary legends and his work as influenced a lot of the greatest writers, he is best known for his gothic horror genre and has been referred to by many as the 'true master of horror', although he Is best known for his Horror and Poems, he had also added to the crime fiction genre with his 'short stories of Dupin' work, Dupin is a detective that critics say ...read more.

The second aspect of Victorian England portrayed by Conan Doyle was the 'patriarchal societies', In a patriarchal society Men will always govern their own families by paternal right, and women had little or no control over their family and their financial attributes, this was shown as Helen Stoner and her sister could not touch the money they inherited from their deceased mother, unless they marry, and Dr Roylott, the male leader of the family easily exploited that rule by brutally murdering Julia Stoner before she got the chance to Marry and claim her inheritance. Arthur Conan Doyle's skill of indulging readers into the fantastically mysterious world of Sherlock Holmes derives from his talent of describing characters in peculiarly interesting ways. Sherlock Holmes has repeatedly been depicted as an extraordinarily intelligent and perceptive individual, evidence for this was in his superhuman skill of rapid deduction, and how by appearance alone he can come to an accurate conclusion of a person's occupation, transportation methods and leisure interests, evidence for this is in 'the red headed league', when Mr. Jabez Wilson came to Holmes about his problems and Holmes trying to prove his detective skills said beyond the obvious fact that he has at some time done manual labour, that he takes snuff, that he is a freemason, that he has been in China, and that he has done a considerable amount of writing lately, I can deduce nothing else", this surprising array of facts sourced by the clients appearance alone astonishes the readers, but then the reader's are informed of how Holmes came to the deduction, for instance, "I ...read more.

I asked, smiling. "In the bathroom," he answered, "come on, my boy, and we shall see whether it will fit the lock." The culprit is then caught after being pursued, or killed in the case of Dr Roylott in 'The Speckled Band," After the Culprit gets caught, Holmes or the Culprit then ends the story by unraveling the plot and they announce how & why the crime was committed. The Purposes of the Sherlock Holmes stories are mainly to entertain, as all of the cases are mysterious and they challenge the reader to solve the mystery Holme's has been assigned, although it is fairly impossible because the cases always have hidden facts that are fundamental in solving the mystery but are not given to you, an example of this is in 'the speckled band', we are told that Dr Roylott has a cheetah and a baboon, but we are not however told that he had a snake, which effectively would have solved the mystery. Another purpose of the stories were to signify the class divide in the Victorian times , such as between Men & Women, Whites & Natives , and to inform the audience of the various social issues that occur in the era. In Conclusion the Sherlock Holme's stories are an entertaining, evocative, epic example of the mental workings of a genius at his own field, and they provide a moral guideline to the audience. The Sherlock Holme's character provide inspiration to the hundreds of thousands people who have read it and the millions more who in the future like I have, would come to enjoy it. ?? ?? ?? ?? By Olawale Sanni ...read more.