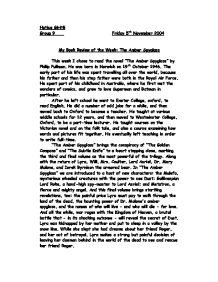 Hatice Giritli Group 9 Friday 5th November 2004 My Book Review of the Week: The Amber Spyglass This week I chose to read the novel "The Amber Spyglass" by Philip Pullman. He was born in Norwich on 19th October 1946. The early part of his life was spent travelling all over the world, because his father and then his step father were both in the Royal Air Force. He spent part of his childhood in Australia, where he first met the wonders of comics, and grew to love Superman and Batman in particular. After he left school he went to Exeter College, oxford, to read English. He did a number of odd jobs for a while, and then moved back to Oxford to become a teacher. He taught at various middle schools for 12 years, and then moved to Westminster College, Oxford, to be a part-time lecturer. He taught courses on the Victorian novel and on the folk tale, and also a course examining how words and pictures fit together. ...read more.

He takes Lyra down to the world of the dead to rescue Roger and all the other dead people. Then they go to Lord Asriel who sacrifices himself to kill Metatron, the angel authority, to keep his daughter and Will safe. He and Mrs Coulter, Lyra's mum, work together to push Metatron into the Abyss but fall in to it with him. Then his task is to show the angels how to close a window that has been opened by the Subtle Knife so that all the windows can be closed because of the problems such as the loss of dust and the spectres. Philip Pullman uses a lot of description in his novels. He gives the readers the satisfaction they expect from the book:- well structured story line, good characters, interesting settings and plots, supreme elegance of style and tone, a richly inventive imaginative landscape, and, some very big ideas fearlessly explored. ...read more.

Given power by the Authority to see the worst in everyone, No-name and her compatriots plague the souls in the world of the Dead. Sattamax: Mulefa Elder who describes the inexplicable demise of the Seed Pod trees and enlists Mary to help his people find the cause and the solution to their dire situation. I think there is no target audience for this book because I think it can be read by all age groups. In conclusion I found the novel "The Amber Spyglass" just as interesting and enjoyable as the first two books in the trilogy. It uses a lot of imagination and descriptive words. Out of ten I would give "The Amber Spyglass" a ten because I enjoyed reading it and was hooked into the third and final book of the trilogy after reading the first chapter. I liked the way Philip Pullman added a small amount of what was happening in Lyra's dream in between the chapters. I recommend it to anyone and everyone!!!! By Hatice Giritli Group 9 ...read more.