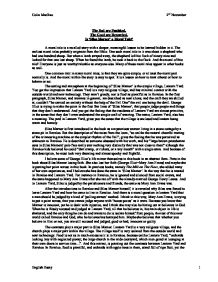 The Bad are Punished, The Good are Rewarded, Is 'Silas Marner' a Moral Tale? A moral tale is a recalled story with a deeper, meaningful lesson to be learned hidden in it. The earliest moral tales probably originate from the Bible. One such moral tale in it was about a shepherd who had one hundred sheep. But when a lamb strayed away, the shepherd left his flock of ninety-nine and looked for that one lost sheep. When he found the lamb, he took it back to the flock. And the moral of this tale? Everyone is just as worthy/valuable as everyone else. Many of these moral tales appear in other books as well. One common trait in many moral tales, is that they are quite simple, or at least the moral part normally is. And the moral within the story is easy to spot. It is a lesson on how to treat others/ or how to behave or act. The setting and atmosphere at the beginning of 'Silas Marner' is the simple village, Lantern Yard. You get the impression that Lantern Yard is a very religious village, and has minimal contact with the outside world and new technology. They aren't greedy, nor is food as plentiful as in Raveloe. In the first paragraph, Silas Marner, and weavers in general, are described as near aliens, and the craft they are skilled at, couldn't "be carried on entirely without the help of the Evil One" the evil one being the devil. George Eliot is trying to make the point in the first few lines of 'Silas Marner', that people judge people and things that they don't understand. ...read more.

In the second chapter, The Groove Made by Fifteen Years in Raveloe, the mood is set that Silas is "unhinged" from his "old-faith", and "the past becomes dreamy because its symbols have all vanished, and the present too is dreamy because it is linked with no memories". What Mary Ann Evans is trying to say is that when you are in a new space, a new environment, everything becomes blurred, and dreamy, because you do not know this place and have no memories of it. And that memories are what make a place, for example, home is not home, unless you have memories of that place, and you know people there. But for Silas, Raveloe is like a new world, and it is all dreamy to him, because he has no memories of that place. The town's people in Raveloe, because they don't understand him, do not trust him either and keep their distance. Silas after his exile from Lantern Yard, doesn't trust God or people and they do not trust him back. He rarely leaves his cottage, except to get essentials, and doesn't talk to anyone. So they think he is a bit mysterious, and therefore don't trust him. "His first movement after the shock had been to work in his loom; and he went on with this unremittingly, never asking himself why, now he was come to Raveloe", and this extract, tells us Silas' reaction to moving into Raveloe, and his instinct almost tells him to work. But at first, he doesn't care for the money, only to work: but "it was pleasant to him to feel them in his palm", the five gold guineas he held. ...read more.

And to say that you only need a simple life to have simple pleasures, and this is the same with Silas. I do think 'Silas Marner' is a moral tale. But not just about the way we behave. I think it is trying to tell us that we don't need great wealth to be happy, that happiness cannot be bought with money, and this moral is repeated in Silas' and Eppie's stories. Also, that the truth always comes out sometime, and you can't keep a secret or lie forever. Dunstans secret about him stealing the money comes out in the end, it takes sixteen years for the truth to come out but it does come out, and I think that is what the author has tried to emphasis; it may take a while, but the truth does come out eventually. I think a very old moral also appears, "treat your neighbor has you would like to be treated" and I think this is the case with Silas and Dunstan. They both either disrespect people, or try to isolate themselves from them, and they both got the same treatment back. But Dunstan, among other things was just disrespectful, and he was punished for that. Silas though, he did have an almost plausible reason for his actions, and at least he never did any wrong. I think what the main moral within the book that the author is trying to get across is to try to be kind, honest, truthful, and respectful, and the same will happen to you. And I think this story has come from many of the authors own imagination, but also from her own experiences with religion, society, and also social life and differences. Colin MacRae 2nd November English Essay 1 ...read more.