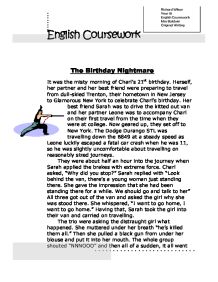 English Coursework The Birthday Nightmare It was the misty morning of Charl's 21st birthday. Herself, her partner and her best friend were preparing to travel from dull-skied Trenton, their hometown in New Jersey to Glamorous New York to celebrate Charl's birthday. Her best friend Sarah was to drive the kitted out van and her partner Leone was to accompany Charl on their first travel from the time when they were at college. Now geared up, they set off to New York. The Dodge Durango STL was travelling down the B849 at a steady speed as Leone luckily escaped a fatal car crash when he was 11, so he was slightly uncomfortable about travelling on reasonably sized journeys. They were about half an hour into the journey when Sarah applied the brakes with extreme force. Charl asked, "Why did you stop?" Sarah replied with "Look behind the van, there's a young woman just standing there. She gave the impression that she had been standing there for a while. We should go and talk to her" All three got out of the van and asked the girl why she was stood there. ...read more.

As soon as they went into the barn, the only words they could think of to describe the barn were aged, haunted and eerie. Suddenly, something made the group jump out of their skin. Not literally. From the corner of the building came a sound, a sound that was made by someone dropping something. The group were together and no one was around them. They all turned round and out of a corner of darkness appeared a little boy looking for food. All he said was five words "For your safety, leave now." Sarah finally decided that they should find somewhere to ring the sheriff from. So Sarah and Leone set off to find a shop or nearby house where they could call the sheriff again. They walked through the woods and came out to find a house that looked lived in as the lights were on. They knocked at the door and were greeted by an old man around the age of 70. Leone asked the man "A girl has committed suicide in our van, may we call the sheriff?" The man agreed but would only let Sarah use the phone. ...read more.

The car failed to start. Charl shouted "SHIT!" and kept turning the key in the ignition but the car was going nowhere. In the rear view mirror, Charl could see the man approaching the car. He opened the passenger door and pulled Sarah from the car. Sarah, led on the floor, kicked the man in the testicles and tried running, but the man was too quick for her and slashed her arm with the samurai. She fell to the ground immediately and was as good as dead. To even slash her chances of escaping, the man slashed the muscles in her arms and legs so she had no means of movement. Meanwhile back in the car, Charl was using her skills she learnt from her late father, she was hotwiring the van. A sound fulfilled her. The sound she had wanted to have the sense of hearing for some time, the car engine. She put the car into gear and headed for the man. He turned round to feel the van bumper hit his face. Charl looked back to see the man dead and now felt at ease. Her birthday celebrations had been shattered and were glad to get home. The police made inquiries, but they found no man to her description so someplace, somewhere, he's still out there... May 9, 2007 Page 4 ...read more.